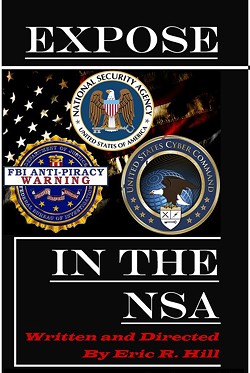 Little wonder that Hill, a Vermont-born theatrical artist and playwright, named his production company, Seeing Redd. As he puts it, “If I don’t upset the audience on some fundamental level, I have failed.”

On Thursday evening, March 6, Hill showcases Exposé in the NSA, a one-act play he wrote and directed about what goes on behind closed doors, shady corporate dealings, black-op missions and “how far the largest military on earth will go to cover its tracks and ‘take care’ of a threat.”

Hill explains via email that his stand-alone play, part of a larger theatrical work, examines the concept of “personhood” via the (as yet) fictional secret abduction, torture and elimination of the two greatest threats to U.S. homeland security: Edward Snowden and Julian Assange — portrayed by Vermont-based actors Thomas Hunt and Lauren Chapman, respectively.

Hill is a 2012 graduate of Johnson State College, where Exposé in the NSA will be performed; the free show starts at 7 p.m. in the Dibden Center for the Arts. He’s written, published, produced and directed three other plays, a full-length musical, and a theatrical adaptation of Jane Yolen's novel The Devil's Arithmetic.

Hill says that he started Seeing Redd Productions in 2012, the same year he graduated JSC, because “the more I worked in local and community theaters, the more I realized [that] their hands were tied in terms of creativity. They operate in fear of upsetting their audience, out of fear of empty seats, and ultimately the fear of money. So they pander to sensibilities, play it safe and stop taking chances.”


Exposé in the NSA debuted at the Champlain Mini-Makers Faire in September 2013. It’s since been “refined and polished” based on audience feedback from that performance — and will be further revised based on feedback from the JSC production.

Hill describes this production as a "live workshop." Unlike, say, the recent Kronos Quartet performance at Burlington’s Flynn Center for the Performing Arts,  Hill actively encourages audience members to bring — and use — their smartphones during the performance to tweet, Instagram and otherwise socially comment their feelings, ideas and musings live at #ExposeInTheNSA. Hill and his cast will then host an audience Q&A afterward, based in part on those comments.

As for assurances that the NSA will not be listening in on that online dialog, Hill makes none.