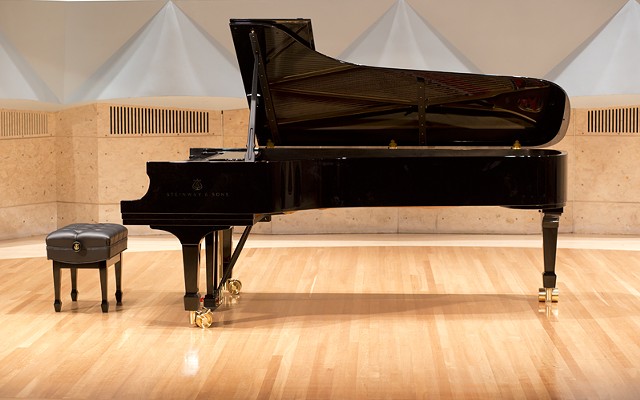 The coming years at Middlebury College promises even greater euphony thanks to a brand-new Steinway. The grand is renowned as the piano of choice in concert halls around the world, and Midd recently became home to one of them. It is a gift of the Meredith, Ray and Nathaniel ('12.5) Rothrock family in honor of President Ron Liebowitz and his wife, Jessica Liebowitz.

Here are some fun facts: The piano has 12,000 parts. It is nine feet long and weighs 990 pounds. Steinway grands are painstakingly manufactured in a process that takes nearly a year to complete.

“It’s thrilling to see this instrument rolled out on our stage for the first time,” says Allison Coyne Carroll, associate director of the performing arts series at Middlebury, in a press release. “This piano is a wonderful addition to our concert hall, and its quality will be a joy for performers and audiences alike.”

Steinway artists and concert soloists Richard Goode and Paul Lewis, Middlebury faculty member Diana Fanning ’71, and Middlebury alumna Gwendolyn Toth ’77, traveled to the Steinway factory in Queens, N.Y., in late October 2013. They tested five pianos chosen to suit the acoustics of the Mahaney Center concert hall. Luckily for the world-renowned pianists who appear there, as well as listeners, a concert grand was the top choice.

The college celebrates its new, glossy-black Steinway on Saturday, March 1, with a lecture and concert. Guest Joseph Polisi, president of the Juilliard School, kicks off the event with a talk titled "The Arts, Education and the Human Experience" at 4:30 p.m. in the Mahaney Center concert hall. Polisi was awarded an honorary Doctor of Arts degree from Middlebury in 2010.


The evening concert follows at 8 p.m. with an eclectic mix of performances by students, faculty and alumni meant to showcase the piano's versatility.

All events are free and open to the public, but tickets are required for the evening concert and can be reserved through the Middlebury College Box Office, 443-6433, or website.