In Vermont, Even Righteous Anger Is Friendly | Live Culture

In Vermont, Even Righteous Anger Is Friendly Spotted this morning in the men's locker room of the Pomerleau Family YMCA in downtown Burlington, the above note gets the tone just right: pissed off but somewhat forgiving, and even a little amused.

Wallet Thief, 'fess up, if for no other reason than this is a pretty excellent note.

Tuesday Update: The wallet was returned!

On Friday, in the men’s locker room of the Pomerleau Family YMCA in downtown Burlington, I had noticed this little half-page sign on an adjacent locker. Struck by the evenhandedness of the writer’s tone (and the Bruce Lee quotation), I snapped a photo and posted it to Live Culture, the Seven Days arts blog.

While this modest little post didn’t “blow up” in the way that, say, the “Leave Britney Alone!” video did, it garnered quite a bit of commentary online. (At last count, the post had more than 500 Facebook “likes.”)

None of which would be worth further comment had the story not ended happily. Jeetan Khadka, 24, the former Bhutanese refugee who wrote the note, had his wallet returned to him Monday by employees of a Burlington post office. Apparently, the thief, after extracting currency and credit cards, had dropped Khadka’s wallet in a sidewalk mailbox. 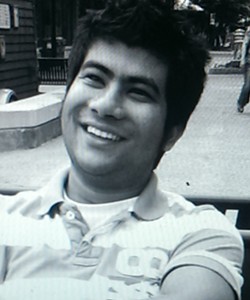 In a short phone conversation with Khadka Tuesday, it became immediately clear that the tone of forgiveness in his note was in no way ironic. Khadka’s generosity of spirit was evident, not only in his story about how he’d wound up befriending someone who’d stolen from him once before, but in his chosen profession as a “young adult navigator” with the Chittenden County Youth in Transition grant program.

Pleased and surprised to have his wallet back, Khadka, a Burlington resident, was also sympathetic to the situation of the thief. “Whatever decisions we make — poor or rich or whatever — they have to do with the situation that we’re living in,” he says. “The person who made that choice [to steal the wallet], maybe it was a good choice for them. I believe that this person is not really bad. We all influence each other.”

Khadka’s green card was among the items returned to him intact. Though he’d had the foresight to make a copy of it, he was nevertheless anxious about its absence, since his application for U.S. citizenship is currently in process. Khadka came to Vermont in 2008 after 17 years of living in a refugee camp in Nepal. He is not currently a citizen of any country at all.

Though his positive attitude toward Vermont has not been diminished by this incident, Khadka does admit that it is probably time to purchase a padlock.