Seven Questions: Amber LeMay of the House of LeMay 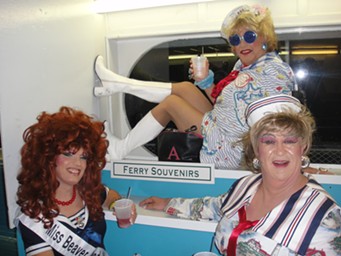 This Saturday, February 15, Higher Ground will play host to the 19th annual Winter Is a Drag Ball. The club-wide, two-room blowout has a well-earned rep as just about the most fabulous party around. And with six hours of entertainment and more than 100 performers, this year's bash should be no exception.

The theme this year is Sailors & Mermaids. (Didja catch the sly wink at S&M there? Nudge, nudge.) And the acts slated for both Poseidon's Ballroom and the adjacent Siren's Lounge — aka the HG Ballroom and Showcase Lounge — should certainly shiver some timbers and swash some buckles … or something. These include "A Pirated Prince" (Craig Mitchell and band performing Prince's Purple Rain),

To prep for the big night, we caught up with the belle of the ball, Amber LeMay of the local drag troupe House of LeMay, to play a little game we like to call Seven Questions. ———-

SEVEN DAYS: This is the 19th annual Winter Is a Drag Ball. How has the event changed over the years? How do you see it evolving in the future?
AMBER LEMAY: What's cool is how things haven't changed that much over the years. The original intent was to throw a big party in the middle of winter where people could dress up and have fun. All acts were "live" (no lip sync) and local. We have allowed some lip-sync performers in the lounge, but the acts on the main stage have to be live or include some sort of a production number.

SD: What’s the wildest thing you’ve seen at a Drag Ball?
AL: I have been sworn not to divulge this to protect the innocent.

SD: If you could invite any performer, living or dead, to headline the Drag Ball, who would it be and why?
AL: Hopefully my ideal headliners will be here for next year's 20th Drag Ball: Cherie Tarrt and Yolanda. They were the hosts of the first Drag Ball and responsible for Burlington's drag resurgence in the 1990s. But, if they couldn't make it, I'd want Bette Midler. To me, she exemplifies the meaning of drag ... be outrageous and have fun doing it.

SD: There are roughly 3,486 pictures of me posing with the lovely ladies LeMay at various bars and social events around town circulating the interwebs. In every single one of them I have this weird, scrunched-face smile that only ever seems to appear in those pictures. What’s up with that?
AL: My guess is that it's because either one or two of us is grabbing your bubble butt while the other one is tweaking your nipple.

SD: Why the eff isn’t there a gay bar in Burlington?
AL: Let's talk.

SD: Favorite drag queen name of all time? (Sub-question: If I were a drag queen, what would my name be?)
AL: Ida Slapter. Some people choose the name of their first pet and their mother's maiden name. But for you, I'm naming you St. Ginger Vitas Danze.