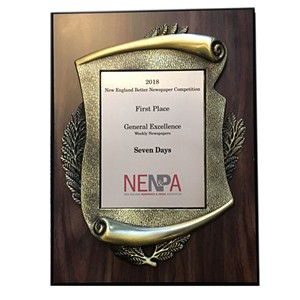 The contest is organized by the New England Newspaper & Press Association; winners were announced at NENPA’s annual convention this past weekend in Boston.

Here’s what judges had to say about Seven Days’ 11 first-place awards:


Seven Days received second-place honors for best overall website, its investigative reporting series on the nonprofit sector, Give and Take, and for Kids VT, Seven Days’ monthly parenting magazine. Alicia Freese won second place for her education reporting on Saint Michael’s College and health reporting on inmates and addiction. Molly Walsh received second place for her human interest feature on Ryan McLaren, who experienced a life-altering ski accident. Eva Sollberger brought home a second-place award for her video on the “March for our Lives” in Vermont’s capital. Lastly, Kym Balthazar came in second place for her cover illustration on the March 21, 2018, issue.
Prev
Next