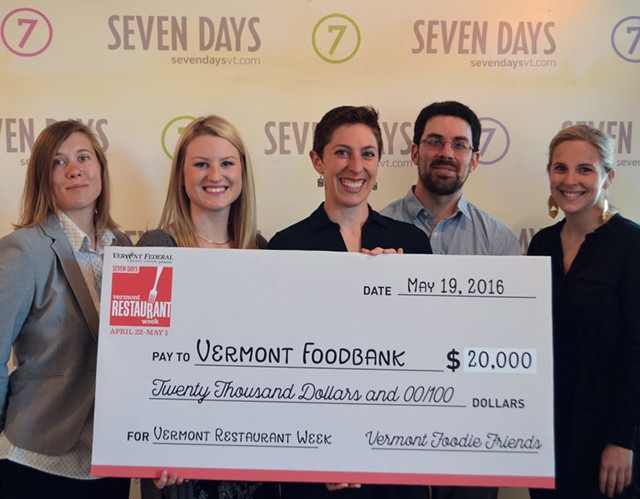 A total of $20,000 was donated to the Vermont Foodbank as a result of Seven Days' 7th annual Vermont Restaurant Week. This popular event was presented by the Vermont Federal Credit Union and organized by Seven Days, publisher of 7 Nights, the statewide guide to Vermont’s restaurants and bars.
“From everyone at the Foodbank and on behalf of the 153,000 people we serve every year, thank you to Seven Days, Vermont Federal Credit Union, Vermont Community Foundation, City Market and all the restaurants and people who participated in this year’s Vermont Restaurant Week,” said John Sayles, CEO of Vermont Foodbank. “The impact of your collective effort during VTRW will result in 60,000 meals for our friends and neighbors struggling with hunger. That’s a huge feat for which we are so grateful.”

“Vermont Federal has been the presenting sponsor of this event for seven years now,” said Bernard P. Isabelle, president and CEO of credit union. “We are very happy with the growth that has taken place both in supporting local industry and in donations to the Vermont Foodbank.”

Many factors contributed to the total donation. All proceeds from the Best Bite Bash, a tasting event and competition among local chefs, went to the foodbank. Donations also came from a panel discussion at ArtsRiot; from Belly Laughs, a food-themed improv show at Vermont Comedy Club; event raffles; and a portion of sponsorship dollars.

For the third year in a row, the Vermont Community Foundation provided a matching grant of $5,000 for the foodbank. The foundation was established in 1986 by Vermonters to serve their charitable goals and provides leadership in giving by responding to community needs, mobilizing and connecting philanthropists, and by keeping Vermont’s nonprofit sector vital with grants and other investments.

City Market/Onion River Co-op, one of the festival’s sponsors, made the Vermont Foodbank its 40 percent recipient in the store’s Rally for Change program during the month of April. That program encourages customers to round up their total at the register.

Lastly, participating restaurants were encouraged to set up individual fundraising pages on crowdrise.com to help raise more money for the foodbank. The Essex, Vermont’s Culinary Resort and Spa accumulated the most donations during the week.

More than 100 restaurants across the state participated in Vermont Restaurant Week this year. Each location offered special, prix-fixe meals during the event, which ran from April 22 to May 1.

In 2000, the Lake Champlain Regional Chamber of Commerce selected then-5-year-old Seven Days as Business of the Year. Eight years later, the Burlington Business Association did the same, citing the company's exemplary business practices, contributions to the community, and promotion of a positive image for Burlington, as well as business success. In 2015, Polston and Routly were inducted into the New England Newspaper Hall of Fame.