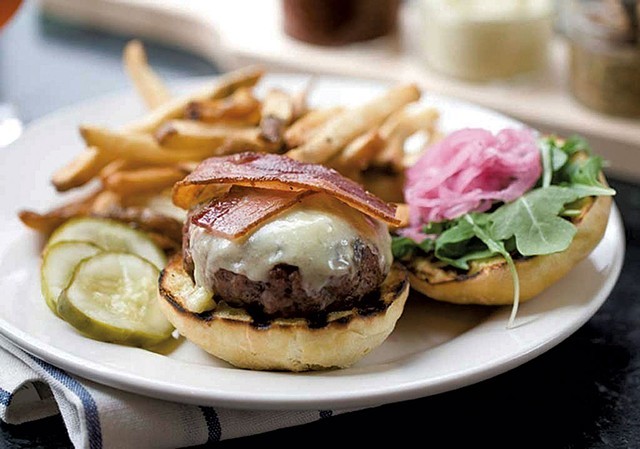 The Farmhouse Tap & Grill in downtown Burlington has closed Sunday and Monday this week after learning that a customer who ate there on Wednesday, August 26, had since tested positive for the coronavirus, owner Jed Davis said. The patron called the Farmhouse on Saturday night to tell the restaurant about the test result.

“The customer was kind enough to call us,” Davis told Seven Days Sunday afternoon. “I definitely appreciated it. It’s not a call you want to receive, but you’re thankful to receive it.”

On Sunday, managers at the Farmhouse initiated contact tracing. Using contact information the restaurant collects from diners, per state guidelines, the staffers contacted about 20 parties that were in the vicinity of the diner on Wednesday, Davis said.

The customer, who dined with family members, was eating at a non-peak hour between lunch and dinner, Davis explained. The group was sitting inside by the open garage-door-style windows facing Bank Street.

“Our doors are wide open,” he said.

Davis added that he spoke on Saturday night with the server who waited on the diner in question; the server told Davis they intended to get tested for the virus.

The restaurant decided to close for two days “out of an abundance of transparency and caution,” Davis said. “And, to be very honest, our staff could use a break.”

The Farmhouse contacted about 100 parties that had reservations at the restaurant for Sunday and Monday to tell them the restaurant would be closed those days.

“They were bummed they couldn’t dine with us,”  Davis said, “but very appreciative of the call.”

Davis also said that he hasn't heard from the Vermont Department of Health regarding the diner’s positive coronavirus test. But he noted that it happened just yesterday.

In an interview with Seven Days earlier this month, Elisabeth Wirsing, the department’s food and lodging program chief, described its role in contact tracing.

“If a restaurant is identified during what is determined to be the patient's infectious period, the contact tracers will contact the restaurant and review what protocols [were] in place to mitigate transmission of COVID,” she said.

In recent weeks,  instances have occurred in which a local restaurant or brewery closed for a few days after an employee reported a possible exposure to the virus. The businesses reopened after staffers were tested.

In closures reported in Seven Days, at Foam Brewers and Zero Gravity Craft Brewery in Burlington and their affiliated restaurants,  test results came back negative. A similar situation occurred at the Kitchen Table Bistro in Richmond, according to the restaurant’s Facebook page.

The Farmhouse announced its two-day closure on social media.
Prev
Next