When Kraemer & Kin opened as the first brewery in the Champlain Islands in February, co-owners Christie, Levi and Heather Kraemer hoped to establish a tasting room within a year. Despite the global pandemic, it took them only five months to achieve that goal.

On Friday, July 3, the family-owned microbrewery will open a tasting room inside the GreenTARA Space art gallery and community center at 3275 U.S. Route 2 in North Hero.

“All of the work that’s been put into this space is incredible, and we are absolutely stoked to collaborate,” Heather told Seven Days.  Retired architect and University of Vermont faculty member Diane Elliott Gayer bought and restored the former church, and opened it as a gallery and coffee bar in 2017. 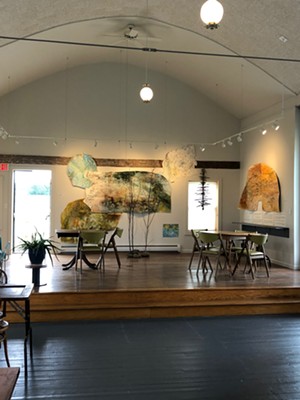 Finding space has been an ongoing challenge for Kraemer & Kin, due to strict wastewater limitations and lack of commercial space in the islands. Six years ago, the trio established a hop yard on Christie's family property in North Hero. It took three years for them to find a home for the brewery's production space; they currently operate a three-barrel system in their garage in Grand Isle.

Christie and Levi had originally looked at the building that now houses GreenTARA Space years ago when it was first for sale, Heather explained. It wasn't the right fit for the brewery's initial plans at that point, but, after adapting their short-term vision, she said they "feel lucky to have reconnected with it, because it is so lovely."

"As the years go by, the vision changes," she continued. "We've become more flexible in what's possible, especially now, when everyone is having to be flexible and adapt constantly."

The tasting room — which will have five tables spaced throughout to comply with current social-distancing requirements — is contained within the existing gallery space, which will continue to feature artworks on its walls.

To maximize safety during the COVID-19 pandemic, the brewery is adding signage and directional tape on the floor to structure the way customers flow throughout.

“The tasting room will provide an opportunity for us to sell direct-to-consumer, and it brings this community element that we’ve always been seeking but didn’t know quite how it would manifest,” Heather said.

Open Friday through Sunday, noon to 6 p.m., the tasting room will offer small samples of beer and packaged sales for takeaway. Customers are encouraged to bring growlers to fill.

For the opening weekend, available beers will include an American IPA, the return of the brewery's popular Honey Ale, and Dandelion Sour — a delicate sour made with more than 1,000 hand-picked dandelion blossoms.

A newly released basil-wheat beer will make its first appearance outside of the brewery's CSA-style growler membership program, too.

To celebrate the opening, the brewery will be selling full pints of beer this weekend; pizzas will be available for purchase from local pop-up bakery El Pan de Mañana. Kraemer & Kin plan to occasionally host food trucks for similar events throughout the summer.

Eventually, the family hopes to establish a farm-based “forever home” for the brewery and taproom, Heather said. In the meantime, Kraemer & Kin is also available at local retailers and both weekly Champlain Islands Farmers Markets.
Prev
Next