Home on the Range Recipes

My most recent virtual cooking lesson with my brother-in-law, Conor, was supposed to prove how easy it is to make delicious roasted chicken and vegetables in just a single sheet pan.

One of our versions turned out delicious, but the other — not so much.
Conor's parents have recently moved from their city home to join him and my sister, Julia, who's about a month out from having a baby.  Julia had joked that they would be much easier graders of her husband's culinary endeavors than she has been.

Case in point: Conor texted me after we each sat down to eat: "My mom gave it a B. Julia gave it a 'See me after class.'"

This was not a huge surprise, given that throughout the process of cooking, Conor's chicken and vegetables had stubbornly refused to brown — to the point that I was throwing shade at their oven.

We will have to claw our way back to honor-student status in our next cooking foray. For now, I  did come up with some learning from this failing grade.

The basic recipe is flexible, but not as much as I'd hoped, apparently.

Russet potatoes (the only kind Conor had) really don't get crispy and delicious when roasted the way all-purpose, waxier potatoes do. I used a mix of fresh broccoli and radishes; Conor used frozen broccoli. I recently learned the latter can be roasted, but in this case the water in the broccoli turned the oven into a steam bath, preventing crisp chicken. And finally, the smoked paprika I used is much more flavorful than the regular paprika that Conor used.

It's also pretty widely understood that roasting or baking two densely filled pans of something in an oven, versus a single tray, will likely take a bit more time. We allowed for that, but it couldn't compensate for the other issues. (I did use a second tray for my vegetables to avoid overcrowding, but that didn't prove to be a problem.)

Please don't let Conor's challenges impact your interest in this recipe, which really is a lovely, easy way to make a one-pan meal with relatively little fuss and mess. The caramelized lemon slices are an especially nice touch. 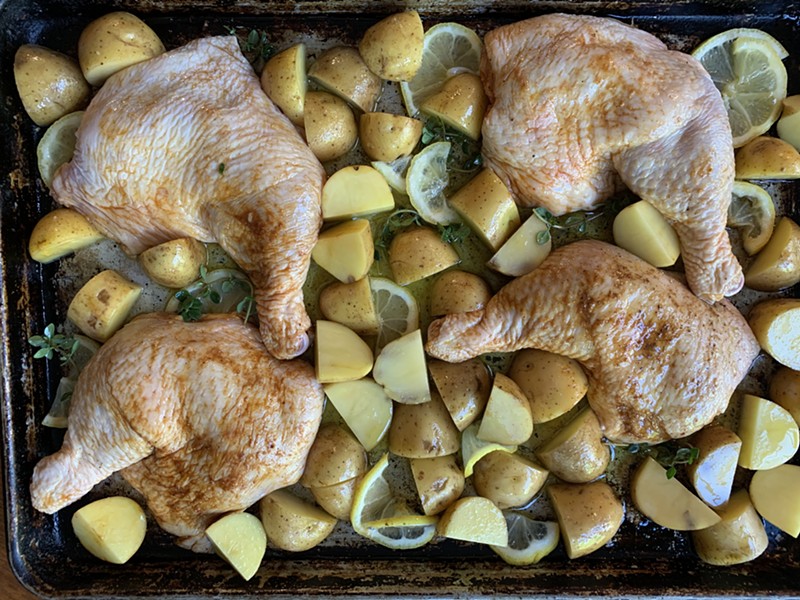 
Got cooking questions? Feel free to email them to pasanen@sevendaysvt.com.

Coronavirus Has Infected at Least 147 Vermont Inmates in Mississippi