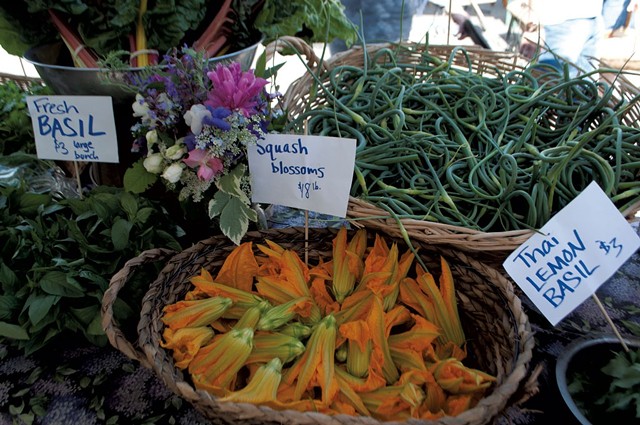 As the winter market season wraps up, market managers and their advisory boards have anxiously awaited guidelines from the state for how they can adapt their operations for the summer season. While the state has closed farmers markets for now, it is expected to allow them to operate in a modified fashion at some point soon, according to a VAAFM document released Friday evening.

The Vermont Farmers Market in Rutland was planning to implement an online ordering system, after the state Agency of Commerce and Community Development approved its request to remain open under "modified operational conditions."

The Burlington Farmers Market posted an announcement on April 7 stating its summer market season would have a delayed start and aimed to open on June 6. Market manager Mieko Ozeki told Seven Days in an interview earlier this week that the market was developing an "essentials only" plan and that pushing the start date would give the steering committee the "gift of time" to put new operational systems in place.

In a meeting of the state Senate Committee on Agriculture on Thursday, held on Zoom and livestreamed on YouTube, VAAFM representative Abbey Willard told senators that the guidance expected today would be "reasonable" and "not that surprising to folks who have been paying attention and following the guidance so far."

Willard said the agency expected guidance from the governor by the end of the day Thursday, saying the Scott administration was looking at protocols  for limiting person-to-person contact at farmers markets, including pre-ordering and drop-off arrangements for essential food items.

"It's not going to be the same type of event that we typically associate farmers markets with, unfortunately," Willard said. "But I believe it's going to provide an aggregated space for Vermont farmers to reach a variety of customers and get their product out to people who are more comfortable purchasing and buying curbside from farmers they know."

Partway through Friday morning's call — led by Secretary of Agriculture Anson Tebbetts — market managers were told that no form of farmers market, even those with adaptations to limit person-to-person contact, could be held. The call was not recorded, despite information from the agency that said it would be recorded and made available on VAAFM's website.

At 7 p.m. on Friday, VAAFM released an official guidance document for farmers market operations. The document specified, "After further consultation with the Vermont Department of Health (VDH), farmers markets are still not permitted under the terms of the current Stay Home/Stay Safe executive order."

The document continued, "Having said that, the State and many of its wonderful farmers markets have been discussing potential mechanisms for markets to operate during this public health crisis, and we expect to allow some form of a farmers market in the very near future."

In light of Friday's developments, the Capital City Farmers Market has decided to cancel its planned market on April 11, market manager Keri Ryan told Seven Days. Farmers who need to fulfill pre-orders will be at the market location, operating as individuals.


The Northeast Organic Farming Association of Vermont (NOFA-VT) has been an outspoken advocate for the safe continuation of farmers markets during the COVID-19 pandemic. In a statement posted Friday afternoon, the organization wrote, "it is critical that our farmers markets be allowed to continue providing direct access to locally produced, nutritious foods in a way that provides access for community members who rely on SNAP benefits, while also supporting the livelihoods of local farmers and food businesses."

Together with the Vermont Farmers Market Association, NOFA-VT has published a proposal outlining recommendations for markets to operate "in a way that protects public health and the health of market vendors and staff."

In an email to Seven Days on Friday afternoon, prior to VAAFM's release of the official guidance, NOFA-VT marketing and communications manager Kim Norman Mercer wrote, "We are watching to see what the governor’s office decides, if anything, in regards to guidelines for farmers markets. We believe that farmers markets are as essential as grocery stores, and can operate safely during this pandemic. Farmers markets are a vital tool in building a resilient local food system, therefore, we are seeking to support all farmers and consumers to connect through modified, safe markets."

Get news about coronavirus in Vermont