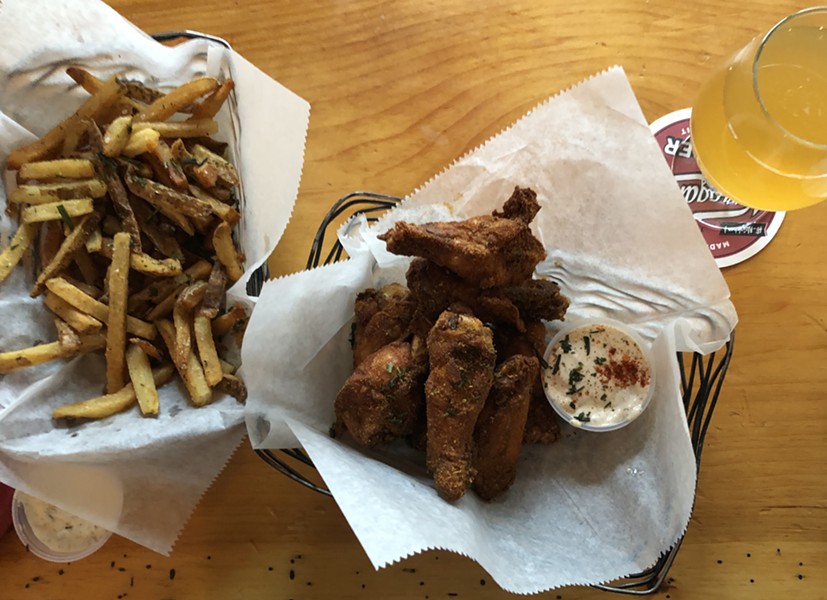 It's normal for me to get a restaurant recommendation along the lines of, "You have to go there for the chicken."

Less normal: "There's an actual, real-live chicken who has taken up residence on the restaurant's patio."


Last weekend, St. Paul Street Gastrogrub in Burlington had both. The tiny, neighborhood spot bridging downtown and the South End always has wings and a popular chicken sandwich to round out its local beer offerings and other creative pub food. But for three glorious days, the corner pub also had its very own poultry ambassador roosting out front.

Gastrogrub staff first noticed their new mascot on Friday, March 6. Right away, they posted a plea on social media, asking, "Anyone missing a chicken?"

Dubbing her "Henrietta," the staff kept a close eye on their surprise guest, despite the fact that she hadn't made a reservation.

She was seemingly wary of crossing the road, the staff said, which might be more of a statement about the construction on St. Paul Street than the setup for a classic joke.


Henrietta reportedly wandered away on Friday night, but was back again on Saturday and stayed through Sunday. "It was the most Vermont-y thing," said Brian Gildersleeve, Gastrogrub's prep manager.

At one point over the weekend, Gildersleeve made Henrietta a nest out of his hoodie and a few clean aprons. "She snuggled into it overnight," he said. The staff applied their excellent customer service to their chicken guest, giving her water, lettuce, leftover cooked rice and a little bit of bread, as a treat.

"It really got us through Sunday," said Gastrogrup barkeep Will Reuss of caring for the bird.

I first heard of Henrietta's presence on Sunday night, when Seven Days staffer Katie Hodges posted a series of selfies with the chicken to our office-wide Slack channel.

Hodges was on her way to Gastrogrub for dinner before a show at ArtsRiot. "We knew they had good apps and beer," she said. After parking up the street, she noticed the chicken outside.

"The bartender started making jokes about how fresh the chicken was as soon as we sat down," Hodges continued. "From where we were sitting at the bar, she was right under the sign for chicken wings, which was hilarious."

"It made my night," Hodges said. "It's so weird, and so Vermont, especially because everyone was so excited about it,"

By the time I made it to Gastrogrub on Tuesday, "Henrietta," whose real name turned out to be Gladys, was no longer camped outside. It's a happy ending, though — she was reunited with her owner on Monday.

"Her owner thought she was dead," Gildersleeve explained. "She got in a fight with a raccoon and flew the coop, ending up here."

Gastrogrub staff had called the Green Mountain Animal Defenders, who arranged for the chicken to be adopted to Richmond before her original owners were aware of her three-day bender. After a few phone calls, though, she's back where she belongs.

"They're happy to have her back," Reuss added.

My natural reaction after listening to Gildersleeve and Reuss recount the whole saga was pretty messed up: I ordered the wings.

Gastrogrub wings come in a variety of flavors and spice levels, including maple jalepeño, dry rub, salt-'n'-vin, barbecue, medium or hot. I ordered the dry rub, which came with eight big ol' wings and a choice of ranch or blue cheese ($11).


My questionable ethics aside, they're damn good wings. The rub was packed with flavor and just a hint of spice, making a perfect afternoon snack. Some dry-rubbed wings can be a little too dry for my liking, but I found myself dipping in the ranch simply because I like ranch, not because the wings needed it.

My coworker, who tagged along in hopes of meeting the chicken, ordered fries ($5 for regular, $8 if you're feeling fancy and want a truffle upgrade). The fries are herb-flecked, skin-on, and my favorite balance of crispy and soft. They're great with the ranch, too.


We both drank low-ABV beers that skewed springy, feeling inspired by the warm weather. I had the tart and light Audrey Two sour from Zero Gravity Craft Brewery, and she went tropical with the toasted coconut and pineapple Little Umbrellas from Four Quarters Brewing.


We were eating around 4 p.m., so it wasn't quite a full meal, but there are plenty of dining-on-a-dime options that are more substantial at Gastrogrub.

If  all this chicken talk has you considering going meatless, Gastrogrub also has vegan and vegetarian options: a tempting arugula salad ($9), the meat-alternative Beyond Burger ($14) and a Beyond burrito ($15). The "Beyond" options don't quite fit in our $12-or-less parameters. But you'll be several bucks ahead of me in the moral bank, so it might be worth the splurge.