Neil Solis, a 33-year-old chef who’s worked at numerous area restaurants, bought the Daily Planet on Wednesday from Copey Houghton, according to both Solis and Houghton. Solis purchased the downtown restaurant and bar with three business partners, including his wife, Rachel.

The Daily Planet opened in 1982 on Center Street in Burlington. Houghton, who has owned the restaurant for 28 years, called the sale “bittersweet,” but said the new ownership would be a positive step for the business and Burlington.

“I think Neil’s fantastic,” Houghton told Seven Days the day before the closing. “I think he’s a great guy for this building, and I think he’s somebody who will run this [restaurant] the way it needs to be run. The new blood coming in is going to be extremely helpful for the Daily Planet itself.”

Solis’s restaurant experience ranges from banquet chef at Basin Harbor in Vergennes to cooking for the Farmhouse Group restaurants, positions that include head chef at El Cortijo Taqueria y Cantina in Burlington. He and his wife owned a Church Street food cart, South End Sliders, that they sold last year.  Most recently, Solis filled in doing prep work at Leunig's Bistro.

The prospect of purchasing the Daily Planet has interested Solis since he saw an ad listing the business for sale in the fall. He said that he and his wife contacted the realtor the day before the birth of their 3-month-old son, Lyle.

“I didn’t want the Planet to go to someone else,” Solis said Tuesday.  “I thought we’d fit in so well there. If you find something that’s got a good brand, go for it.”

He and Rachel, who will manage the front of the house, are buying the restaurant with another married couple, Nicole and Brian Elithorpe of Bridport. Nicole Elithorpe, 56, will be the business manager.

“Neil and I and Rachel are very excited to be business partners,” Nicole Elithorpe said. “We have such respect for Neil and his abilities. I think we can improve the menu and improve the space, and hopefully provide a fun and welcoming community space.” 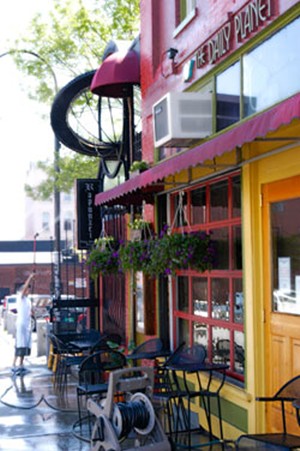 Solis remembers with admiration and fondness his first meal at the Daily Planet: a rabbit dish. He said he enjoyed hanging out at the Planet after his shift at El Cortijo. The bar was a late-night gathering place for restaurant workers, he said, including “the crew from Leunig’s, the crew from Single Pebble."

He sees the Daily Planet as an “open canvas” imbued with a rich history — a place where he can be creative and have fun with the menu. Solis plans to make a bigger version of the slider he served on Church Street, which he described as “that simple cheese-and-grease burger.”

The Daily Planet is in need of some repair work, Solis said. He plans to close the restaurant for renovations for the remainder of January and reopen in February, when he intends to keep the kitchen open until midnight.