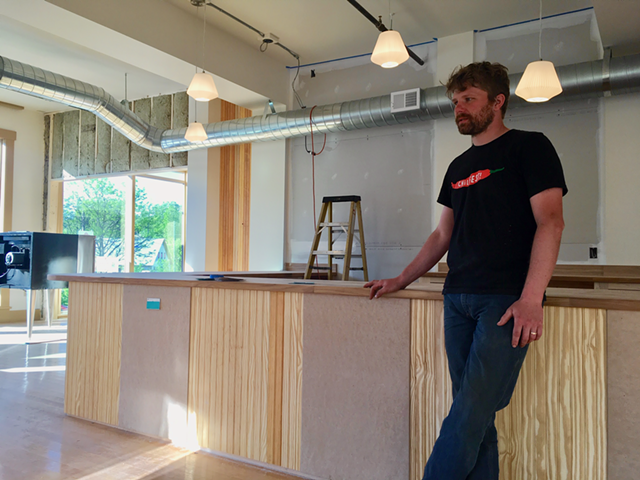 A former vegetable farmer is opening a coffee shop in Hardwick, where Front Seat Coffee will occupy the ground floor space at 101 South Main Street. Tobin Myers Porter will launch his business in mid-July with a grand opening planned for July 27.

The 24-seat café will serve coffee and espresso drinks made with beans roasted at Carrier Roasting Co., a  roastery in Northfield. Milk at the café will come from Sweet Rowen Farmstead in West Glover. Front Seat Coffee, currently under renovation, will prepare baked goods and other food in its kitchen. Menu items will include cinnamon maple toast, avocado toast, curried chicken salad, and tomato soup with a grilled cheese sandwich.

Porter, 32, founded and ran a farm on the Amherst College campus, Book & Plow, before moving to Vermont.  In the Northeast Kingdom, where he lives in South Albany, Porter worked at Pete’s Greens organic produce farm in Craftsbury. More recently, he spent a year doing a variety of jobs at Myers Produce, a food distribution company owned by his wife, Annie Myers.

During that time, Porter and Myers sometimes worked at their computers in the front seat of their car — and wished for a co-working space in Hardwick. This experience led to the creation of the coffee shop and later helped inform the name of the business. As Porter researched the prospect of opening a café,  including a stint working at PK Coffee in Stowe, the idea gained momentum, he said.

“I kept on hearing from people in Hardwick that there was this enormous desire for a coffee shop and a place to be able to work on a computer and a place to meet up with a friend or colleague,” Porter said. “I almost think of it as a daytime bar.”

Front Seat will be furnished with a communal table, café tables, a small couch and lounge section. It will provide free, high-speed Wi-Fi.

“The caliber is going to be really good,” Porter said. “At the same time, we’re really trying to have an affordable cup of coffee.”

The coffee shop, at the intersection of Vermont Routes 14 and 15, has big, plate-glass windows that look out on the crossroads at the center of town. "It feels like it’s the front seat of  Hardwick," Porter said. "You see everyone going by that blinking light."