To Tip or Not to Tip, to Post or Not to Post? Monarch & the Milkweed Stirs Controversy | Bite Club

To Tip or Not to Tip, to Post or Not to Post? Monarch & the Milkweed Stirs Controversy

Updated, November 27, 2018: The post about the tip was removed from Monarch & the Milkweed's social media sites on Monday.

On Small Business Saturday, a small business owner in Burlington publicly defied the long-standing adage," the customer is always right," and posted on social media the restaurant receipt of a customer who left no tip.  On a bill for $48.94, in the line reserved for a tip, the patron wrote  0.00.

But it wasn’t the lack of tip that compelled Andrew LeStourgeon, owner of Monarch & the Milkweed, to post a photo of the receipt on Instagram and Facebook. It was the comment the customer left for the server that prompted his action, he  said.

In capital letters, the customer printed: “YOU LOOKED @ MY ID AND DID NOT SAY HAPPY B-DAY.”

Accompanying the image of the receipt, LeStourgeon posted a series of hashtag comments under the phrase OMG, including:  #outrageous #tipcovered, #getalife, #happybirthday #birthdayzilla, #wtf.

“I knew I was pushing a button, but I didn’t know it would be a wildfire,” LeStourgeon told Seven Days. “I don’t regret it.” 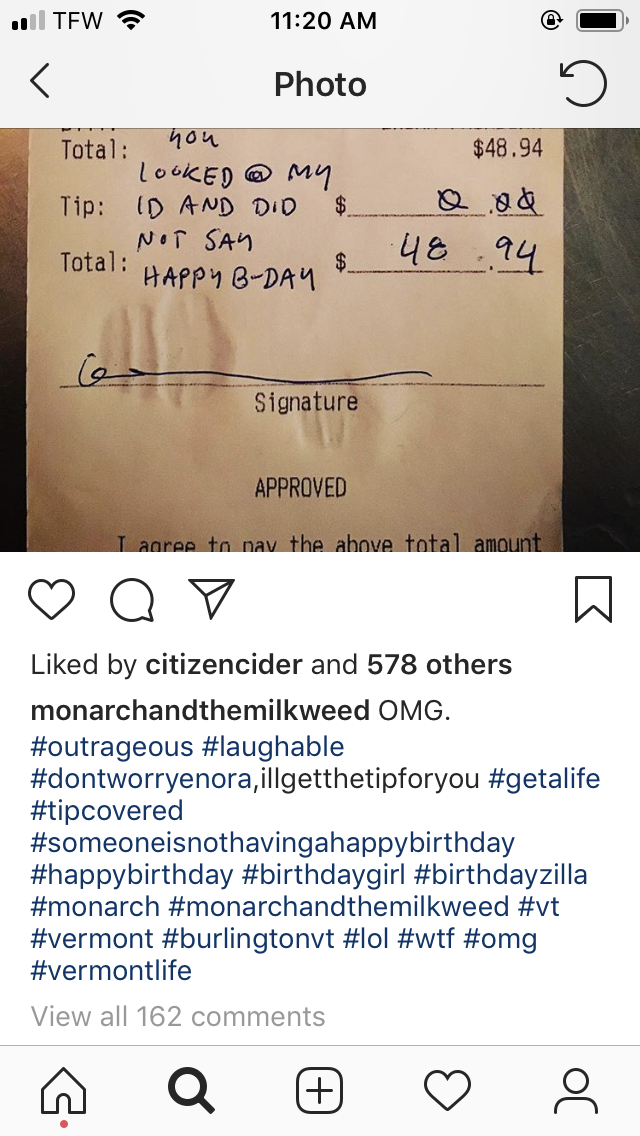 “The reason I posted it is because, now that I am a small-business owner — and, ironically, it was on Small Business Saturday — I have spent a lot of time reflecting that some people treat small businesses as a one-way relationship," LeStourgeon said. "There are people who forget that they still need to adhere to the basic principles of being a human being. My definition of hospitality does not involve mistreatment on either side of that relationship.”

The response online to Monarch's post covers a range of opinions, with the majority seeming to cheer the post while agreeing with LeStourgeon that the customer’s comment is inappropriate.

But some people wrote that the post is an example of “public shaming” and an “unprofessional” response by Monarch. The customer's note called for “compassion,” not bullying, one person wrote.

Other commenters expressed concern that the photo posted on social media includes the customer’s name and last four digits of  a credit card number.   Some people noted that they don't always know  what the date is, or that when checking IDs for proof of age you  look at the year, not the precise day.  The online discussion includes commentary on the culture of tipping, and what it means when a person's  wage is determined in part by a discretionary gratuity.

On Instagram, a commenter called the customer a profanity before observing, "there are 365 days in a year and 7 billion humans, it’s always someone’s birthday.” Another person wrote: “prolly [sic] has expectations of a free birthday dessert as well…”   One commenter posted:  “It just goes to show you that every detail of customer service is a detail to notice. Not everyone believes that [a] tip is entitled. They’ll probably say it next time.”

Other people  thought the post was an overreaction, including this opinion: “This is something you complain to your coworker about, not put on Instagram for a public shaming.”

Some commenters were unimpressed by both the customer and the restaurant:  "I love the Monarch, and I think it's shitty not to tip, and I also think the public shaming response seems kind of petty."

On Instagram, LeStourgeon thanked people for the online discussion, adding:  "All valid!"