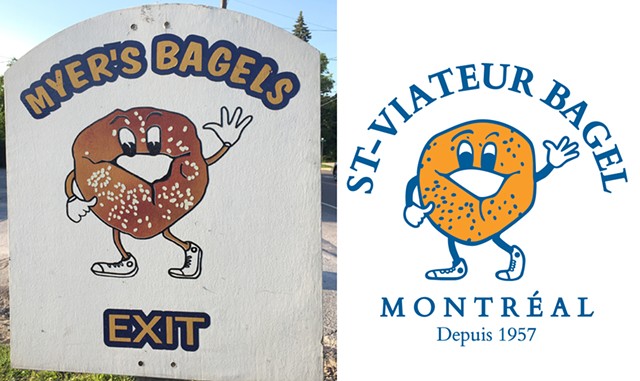 A baffling cross-border bagel mystery turns out to have a simple answer.

Food website Eater Montreal posted a story Thursday with the headline, “A Vermont Bakery Mysteriously Has the Same Logo as St-Viateur Bagel.” St-Viateur Bagel is a famous Montréal shop, opened in 1957 and still running 24 hours a day on Rue Saint Viateur O. The Vermont bakery in question is Myer’s Bagels, the Montréal-style bagel shop that first opened on Burlington’s Pine Street in 1996.

The headline brings up a good point: The two bagel logos do appear to be close to exactly the same. But the rest of the speculative story is filled with holes.

The easy-to-obtain answer involves Lloyd Squires. The Montréal native spent years learning the art of bagel making from Myer Lewkowicz, the St-Viateur founder. When Lewkowicz died, Squires moved to Burlington and opened a shop he named in his mentor’s honor, said Adam Jones, one of Myer’s owners.

According to Jones, Squires and Lewkowicz had a “verbal agreement” that Squires could borrow the St-Viateur Bagel logo: a smiling, sesame-seed coated round of dough that’s waving and walking (wearing shoes, of course). The mascot appears on the Pine Street entrance and exit signs to Myer’s parking lot.

“It arose from St-Viateur, we’re not debating that,” Jones said. “But it wasn’t stolen or done in any secrecy. It was very transparent with St-Viateur Bagel. Lloyd’s mother actually still works there, as well as his sister.”

Seven Days can confirm the latter claim. Squires’ sister, Gail, picked up the phone when a reporter called St-Viateur. She let out a loud laugh when told of the nature of the call.

The shop’s owner, Robert Morena, wasn’t in. But Jones at Myer’s told Seven Days that plans are in the works for his Pine Street store to change its logo. St-Viateur, he said, has talked about expanding south of the border and neither shop wants any bagel-induced confusion.

Jones said Myer’s wants to hold a contest involving local artists who could help the shop create a new logo and branding. But he said there’s no big hurry and the change could come within a year or two.

“We have our own brand and have established what we are,” Jones said. “There are no qualms on our side. But yes, as of August 24, 2018, we have a very similar logo."

Eater later posted an update to the bottom of its article, writing that a reporter had talked to a St-Viateur owner who apparently recounted Spires' past work at the Montréal shop. The owner also "suggested that the Burlington bakery probably shouldn’t be using the cartoon bagel figure," Eater wrote.

Jones told Seven Days there had never been any blowback about the logo, which Myer's has used for 22 years.

“They’re not pressing or filing a lawsuit against us or screaming and yelling,” Jones said of St-Viateur. “Lloyd talks to them all the time.”
Prev
Next