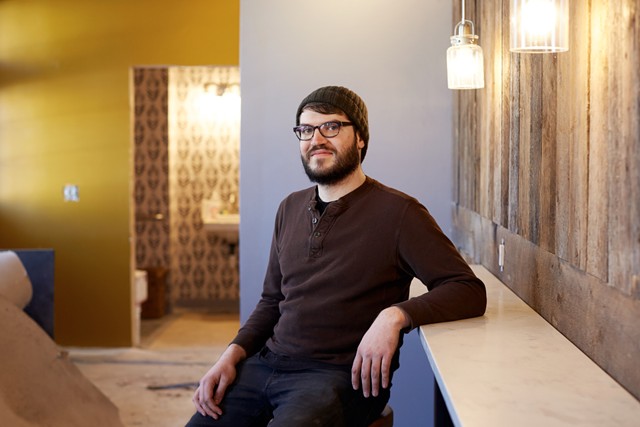 A mini food court is taking shape in downtown Burlington, where a pizza place, a bar and a bagel shop  will soon share a building at 71 South Union Street.

The pizzeria, Folino's, opened in January on the west side of the brick building. The two other businesses — Stonecutter Spirits and Willow's — will join Folino's later this spring.

When Willow's opens, it will be the only "dedicated" bagel bakery in downtown Burlington, to use owner Tyler Bean's word.  The 27-year-old Burlingtonian said bagels have "kind of been my life for a long time."

"I have a pretty good recipe that I've been making at home that we've scaled to a commercial setting," said Bean, whose father, John, is his partner in the venture. "It's something the two of us have talked about in a vague sense for a while, and we fell into this opportunity and went for it."

Bean is a musician who records and performs under the name  Tyler Daniel Bean. He has a master's degree in confessional poetry and literary studies from (now-defunct) Burlington College. He has taught writing and worked as a barista at the Great Northern.

Now he's turning his attention to the bagel shop and café — currently under construction — that he expects to open in a month or so. Willow's will seat about 35 people and serve breakfast and lunch daily from 6 a.m. to 3 p.m.

The bagelry will produce about a dozen varieties, including three or four revolving flavors, Bean said.  "We'll rotate based on what's seasonally available," he said, adding that Willow's will likely make a fennel bagel.

The restaurant will serve sandwiches, soups and an array of baked goods, including  cookies, lemon bars, cinnamon rolls, muffins and biscuits.

"We trying to push into savory within a bunch of the baked goods," Bean said, singling out for praise a butternut squash and blue cheese biscuit.

The plan for Willow's was in the works before Bruegger's Bagels and
Panera Bread closed last winter on Church Street. But the closures gave Bean a little "nudge," he said.

"The competition, locally, all of a sudden wasn't there," Bean said. "And then we were like, holy crap, we got to get our butts in motion and push it."