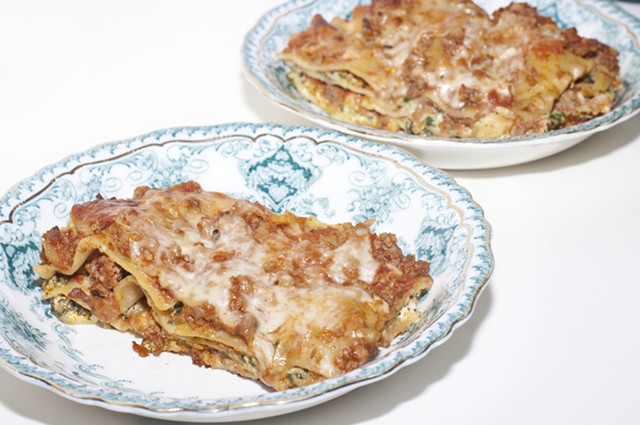 One of my earliest food memories is making lasagne with my mom. She worked at Bradford's Colatina Exit as a prep cook when I was little, and I'm pretty sure her method came mostly from that kitchen. Over the years, she made the recipe her own, and now I've worked it into the regular rotation at my house, using my home-canned tomatoes, local meats  (usually from PT Farm, in Haverhill, N.H., but most pig farmers sell it at market), cheese (Mountain Home Farm makes beautiful ricotta) and whatever spinach I can get my hands on — frozen is cheap and works really well.

The result is a totally classic, midcentury-style Italian casserole: savory and rich — I cook the raw sausage right in with the tomatoes, so all that fat goes straight into the sauce, not down the drain. It's pretty easy to prepare and nearly impossible to mess up. Prep can take half an hour if you're efficient about it, and it bakes for about an hour.

Note: This recipe makes a decent portion: one heaping 9" by 13" pan, plus a loaf pan, filled about halfway. Usually, we'll eat most of the big pan when we have friends or family over  — it's about enough for six people to eat heartily — so it's nice to have the smaller pan in the wings for later in the week. It also freezes well, so you can stash it more long-term if you like.

All of the measurements are a little fudge-y — I make this from memory, so it's a little different each time. But the basis is solid, and built around standard unit-measures of product: one quart of ricotta, two eggs, one package noodles, two pounds sausage, two quarts canned tomatoes.

You can sub finely chopped kale for the spinach if you like, use ground beef instead of sausage  — though I really think sausage is better — or swap vegetables for the meat, if you're a vegetarian. If you go that last route, add a splash of olive oil and allow the sauce to thicken a bit. The veggies have lots of water in them, and you don't want your casserole to be too soupy or it won't set correctly.