Vermont's Top Cow Is a Flatlander 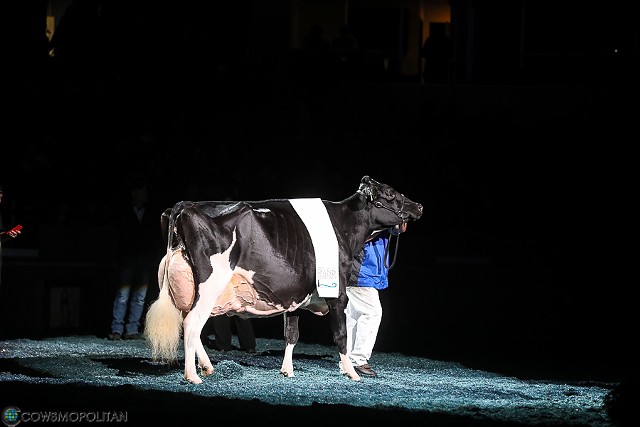 Beer and cheese made in Vermont have earned best-in-the-world accolades. Now another product with Vermont ties — mightier (or at least heavier) than a bottle of beer or a wedge of cheese —  has won top honors.

Blexy, an 1,800-pound Holstein,  was named Supreme Champion at the
World Dairy Expo on October 7 in Madison, Wisc.  She bested about 2,300 animals to win the prize.

"Blexy's extreme," said Sharyn Abbott, 51, who grew up on a Holstein farm in Enosburg.  "She's got a lot of strength, a lot of dairy character for the breed. And she's got a real good udder."

The Abbotts purchased Blexy, a 6-year-old milker, when she was 2.  They selected her for her genetics, Abbott said. Since that time, the Franklin County couple has acquired business partners who own shares of Blexy. The Abbotts own 25 percent of the champion Holstein, who lives on a farm in Wisconsin with one of her co-owners, Abbott said.

Thus, the top cow in Vermont is a flatlander.

"They take exceptional care of this cow," Abbott said of  Budjon Farms in Lomira, Wisc.  "She's given the type of care she needs so she can excel at the shows. It's like an athlete."

A few of Blexy's offspring live in Franklin County, including her daughter, Bliss, a milker at Borderview Genetics.

Blexy has two primary roles:  She is a milker who produces about 150 pounds, or 20 gallons, of milk per day;  and she is a breeder who reproduces primarily through in-vitro fertilization. This involves removing ovarian cells called oocytes from Blexy and fertilizing them with bull semen in a petri dish. The resulting embryo is implanted in a "receptor" animal that carries the fetus to term.

This enables Blexy to reproduce at a greater rate than she would if she were pregnant for 283 days, a cow's gestation period.  She will have an estimated 50 offspring over her lifetime, Abbott said.

"We can get more animals to market and put her genetics out there," Abbott said.

The Supreme Champion of the World Dairy Expo is worth about $150,000, Abbott said.  Blexy's owners and handlers celebrated her victory last weekend with a party at the expo.  Although Blexy is known for her milk, her people drank beer to toast the win.