Border Buster Cider Is the Fruit of Three Local Orchards 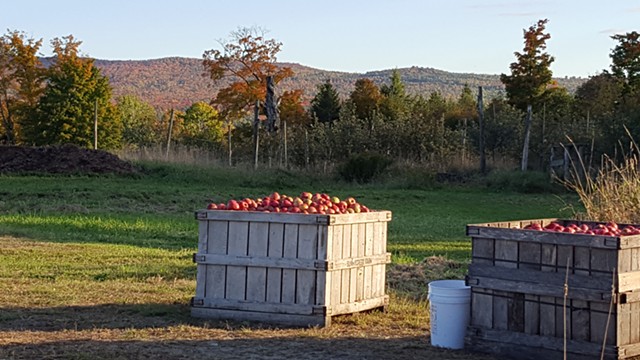 At Eden Specialty Ciders (formerly, Eden Ice Cider), Eleanor and Albert Leger have spent the past several years producing high-end ciders and apple-based aperitifs, many of which command $20 or more for a small bottle. Now, with the debut of Border Buster Cider — which they've produced collaboratively with Verger Heath Orchards of Stanstead, Québec, Sunrise Orchards of Cornwall and Farrell Distributing — they're looking to enter the everyday drinking market.


"This is our first attempt at a less expensive cider," Eleanor Leger told Seven Days. She added that the faintly sweet, sparkling drink is still produced as a vintage cider, fermented with juice that's pressed within a few weeks of harvest.

Named for an annual international swim in Lake Memphremagog, Border Buster is made with mostly dessert-style fruit, including Honeycrisp, Liberty, Snowsweet and McIntosh apples. These are sweeter and less complex in flavor than the hard-to-find traditional cider apples Eden uses for its other products. 2016's vintage also includes several

Leger said importing apples and juice from Québec was fairly easy, requiring just a stop at the border, during which she filled out a form and payed a fee of $10.75.

As for tasting notes, Leger describes the new cider as off-dry — it's back-sweetened with a touch of ice cider — and "all about juicy, full-bodied, apple with nice acidity."

This year's Border Buster release — just 120 cases of 500 milliliter bottles (that's just over a pint) — will be available for about $5 per bottle at outlets including Winooski's Beverage Warehouse, Healthy Living Market & Café, Hunger Mountain Co-op, Waterbury Craft Beer Cellar and others.


Eden has also been collaborating with other cidermakers nationwide, including New York's Angry Orchard, California's Tilted Shed Ciderworks and a host of New England cideries on projects that Leger wasn't yet ready to discuss in detail. But the big idea?

"Banding together with other likeminded cidermakers to [produce] fun, interesting things for people to share," she said.