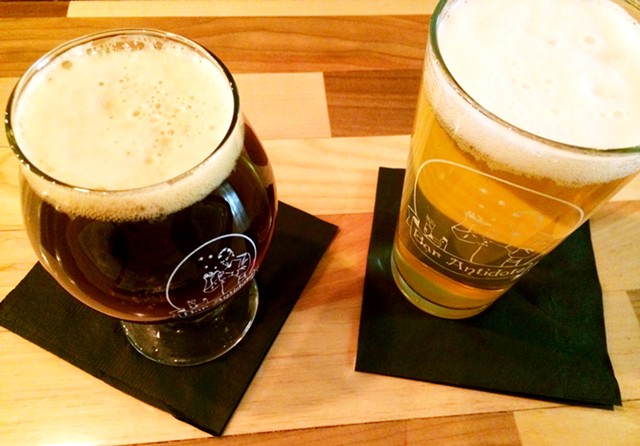 The list of ways in which Vermont spoils me is getting lengthy, and at the top of these indulgences is the $6 pint of local draft beer. Then Vermonters take it one step further: How about a six-buck pint of hyperlocal draft beer?

On a recent weekday evening, I walked into Hired Hand Brewing Co. at 35 Green Street in Vergennes. It's chef-owner Ian Huizenga’s recent expansion to the downstairs speakeasy Bar Antidote. I'd heard that Hired Hand had a mean menu of baked-cheese sandwiches, and what else does a three-degree day call for?

Once again, I found myself on a Vermont barstool considering a brewery’s stock of craft beer ($4 for 11 ounces; $6 for a pint). Each Hired Hand draft was flush with local ingredients, from malt and grains to hops and cold-brewed coffee. To sweeten the deal, the brewery's menu included a baked-cheese sandwich stacked with Huizenga’s housemade kimchi and an espresso-milk-stout shake spiked with vanilla bean ice cream from Lu Lu in Bristol.

It’s in these moments I think to myself, Why would I live elsewhere? (This thought was prompted only by beer and grilled cheese.  A few other ways Vermont can spoil a person thoroughly include the local milk sold in gas stations, the best carrots I’ve ever tasted, and the mountain ranges that pose a different playground every season.)

Due to the misleadingly sunny weather (these bitter days are not on my “Vermont Spoils” list), I relaxed in the warmth of the Hired Hand dining room hankering for a dark brew with a deep, toasty backbone. Nearby, a bartender poured pints of pale ale for two locals sharing a Margherita pizza fragrant with bright, housemade chile oil.

At a wooden table behind me, a family of four gnawed on smoked Misty Knoll chicken wings sided with dressing made from Boucher Family Farm blue cheese. The parents sipped on hazy pints of Hired Hand’s First Cut Series Double IPA, while their teens tipped back root beers. I asked a bar-mate to my left about the orange-adorned drink she was savoring — a beer cocktail dubbed Smokin’ Berries. It was a shandy of sorts made with lemonade, simple syrup, pomegranate molasses, Hired Hand pilsner and heritage cask whiskey from Middlebury’s Stonecutter Spirits.

Hired Hand’s Tractor Pilsner caught my eye. It’s a light brew at 3.7 percent alcohol, but shot through with freshness from ingredients entirely within Addison County: Addison-grown grains, pilsner malt from Peterson Quality Malt in North Ferrisburgh, and Alpha Aroma hops from Homestead Hops in Starksboro. My date and I ordered a couple pints of pils to go with our starters — buttermilk-battered onion rings with sweet chile aioli (and, for me, a glass bottle of Heinz tomato ketchup). There was also a plate loaded with pickled onions, cauliflower, fennel, French beans, cucumbers, kimchi and a citron-colored pickled egg with the sweet kick of turmeric.

A host of warm, supremely friendly bartenders poured samples for customers as the place began to fill up. The hockey game buzzing on one mounted television was soon drowned out by chatter as locals met up after work and newcomers sampled from Hired Hand’s beer menu. After lingering over our pilsners and starters, my date and I ordered two baked-cheese sandwiches: the aforementioned, kimchi-decked Kim Cheese for me; for him, a hot meatball sandwich with homemade meatballs, tomato sauce and Maplebrook Farm mozzarella. Each sandwich, mercifully, came with a pile of mesclun greens.

My sandwich turned out to be satisfying on all the right notes, from the toasted, housemade Pullman bread to the way the briny, spice-steeped kimchi balanced a molten trio of cheeses. And it called for another beer. Guided by my craving for a darker-hued brew, I spied the draft Barn Red Ale, a roasty, 5.2 percent ABV red with Peterson Quality Malt and Homestead Hops’ Nugget and Centennial. It hit with perfect pitch: deep but not brooding, cozily malted but not too sweet, well-hopped and bone-dry on the finish.

And, yes, an excellent pairing for a baked-cheese sandwich.