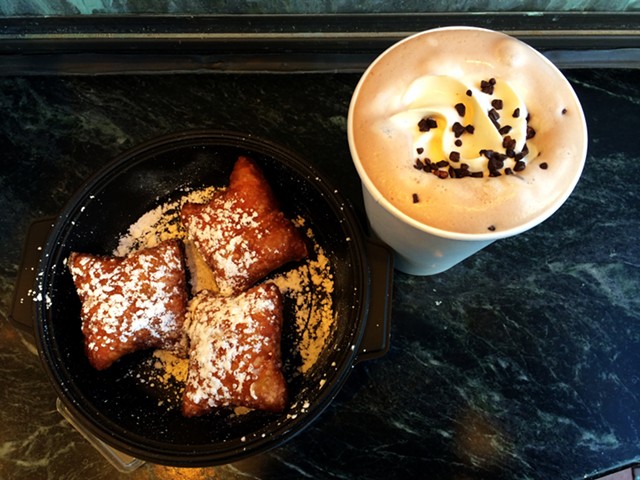 For France-style French, there are baguette sandwiches layered with cured French Bayonne ham and slivers of local cultured butter; foie gras pâté with cherry compote and a tumble of arugula; olive-oil-poached tuna with olives, hard-cooked eggs and haricot verts.

Leunig’s Petit Bijou pulls its culinary influence from a spread of French culture, both local and abroad. But the root of its “Frenchness” lies in the integrity of the food; a small space requires relative simplicity and expert execution without the slightest sacrifice of quality or flavor. Time will tell how Leunig’s Petit Bijou fares, but so far, so good.

Leunig’s cook Mark Benjamin,  the kiosk’s sole cook and cashier, tossed a housemade dog biscuit over the front counter for a visiting buddy’s pup. He's enjoying his time socializing with customers beyond the kitchen, he said.

“At the kiosk, the back of the house comes to work  the front of the house,”  Benjamin explained. “Even chef [Collins] is out here at times.” Behind the walk-up window, he carefully set three plush squares of dough into a standing fryer.

“[Collins] is one of the most hands-on chefs I’ve ever met,” Benjamin continued. “I’ve seen her work the line, work the kiosk, wash dishes. I respect that a lot.”

As he talked, the hot-sugar smell of fried beignets ebbed from the kiosk window. My friend and I ordered a batch, plus a Belgian hot chocolate with housemade whipped cream and grated dark chocolate. The pillow-shaped pastries crackled at the edges when we sank our teeth into them. The core was just-cooked, still pleasantly molten. Warm air shot from our mouths like steam on this freezing day in early January.

But eating al fresco any time of year seems like the height of fine dining if the fare is right and you’ve dressed well  — whether standing at a kiosk counter or sitting at a candle-lit table for two.