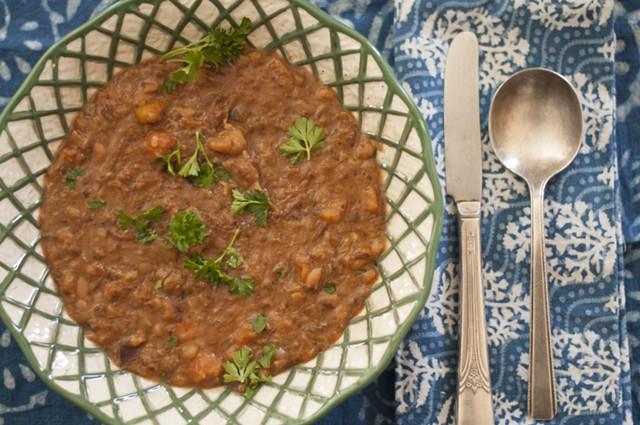 At many small farms and backyard pig pens, November is hog-killing season. My husband and I get our pork from a friend; a group of us gets together each fall to slaughter, butcher and package animals. Before the meat comes home, we clear out our freezers to make way for the new stuff. And that generally means feasting on the remnants of last year's pig. This time, we had a ham to dispense with.

I love a good ham. But perhaps more than the ham itself, I love using its leftovers in dishes like pasta with tomatoes, breakfast tostadas with crumbled blue cheese, or in a brunch skillet with runny eggs and potatoes.

My favorite ham jam has to do with the bones. A whole ham is a pork's rear leg from hip to ankle. Once you've eaten most of  the meat, the leg bones make an excellent soup base. And they're key to thick stews such as split-pea soup and Senate bean soup, which has been served daily at each of the U.S. Senate's three dining rooms since Teddy Roosevelt's first term as president.

Ham-bone-and-legume soups are fairly interchangeable — once you understand how to make one, you can make most others. I usually cook them in a slow-cooker so I can walk away for several hours without worrying that the beans will stick to the pan. I also like that the "keep warm" setting facilitates having warm soup at the ready for two or three days.

That's especially useful with ham soups, because they get better with age. On day one, your soup might taste fresh and bean-y and have a pleasant green or creamy color. By day two, it'll thicken and turn a darker shade as the soup begins to caramelize. Meanwhile, the bones, joint cartilage and marrow dissolve and lend dense, hammy flavor to the beans. By the third day, you may have to add water to thin it out — that is, if there's any left to thin.

For a three-quart slow-cooker