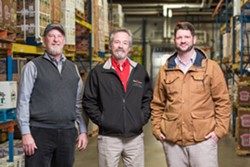 In the words of company president Sean Buchanan, Springfield's Black River Produce "started with a handful of cash and a dream." The food distributor was founded  38 years ago by Steve Birge and Mark Curran, who described themselves as "ski bums."

Since then, BRP has operated as an independent entity — until now. On October 24, the company will be purchased by Illinois- and Wisconsin-based Reinhart Foodservice, the fourth largest food-service distributor in the country. Staff was informed of the change on Friday.

According to Buchanan, the company will retain its identity even as it becomes part of the Reinhart family of businesses. "Black River is a strong brand," he says. "The trucks will still be out there. They'll still say Black River." And, he continues, the company will remain dedicated to using green technology, participating in the local community and selling food sourced from Vermont farmers and artisans.

Given that revenues have been steadily increasing, why decide to sell? With Reinhart's weight behind BRP, Buchanan suggests, the company will be able to do more to help farmers. "Last week someone called in with 120 [cases of] broccoli, and we could only take 40," he says. "We want to be able to take all of them."

While BRP has strong ties to area colleges and hospitals, Reinhart does more business with elementary and high schools. "We want to see an increase in that [sector]," Buchanan says. He believes joining the Reinhart family will also help BRP place more Vermont products in mainstream grocery stores and big-city restaurants.

Buchanan notes that Birge and Curran, both in their sixties, are ready to be a little less involved in the company — though neither is leaving. Over the years, Buchanan says, they've received "tons of offers," including ones from Reinhart. This time, they decided to bite.

"People get nervous when there's change, and that's totally OK," Buchanan adds. "I got a lot of calls over the weekend [from farmers], and I was like, 'Look, did we pick up the squash today? Yes. Are we going to pick the squash up next week? Yes.'"

The president hopes locals will give his company time to demonstrate that, while its new owner may be headquartered in the Midwest, BRP's heart is still in Vermont. "I just hope people really give us the chance to put our money where our mouth is," says Buchanan. "We're not looking to change anything we do, but to have the capital and resources behind us to do it better."