The Alchemist Opens Brewery and Visitor Center in Stowe 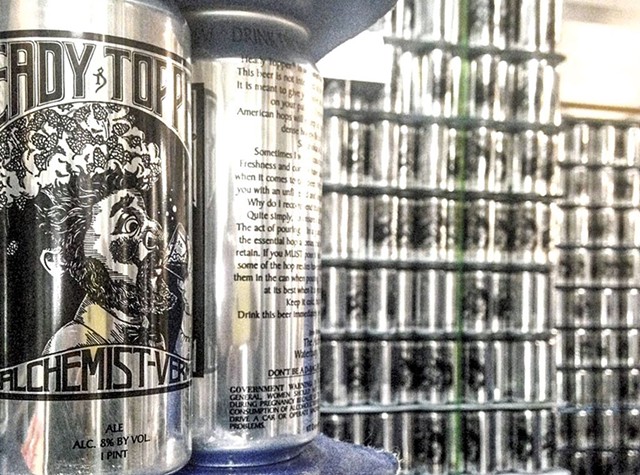 You've heard of Heady Topper? Focal Banger? The coveted cans from that brewery in Waterbury?

Those who brave the hour-long beverage-store queues to get cases and four-packs of the Alchemist's famed ales now have another option. Yesterday at 2 p.m., the Alchemist cut the ribbon on a brand-new brewery and visitors center at 100 Cottage Club Road in Stowe. Here, beer aficionados can enjoy a tasting section, retail shop and educational area with full views of the brewing process.

“John and I look forward to being open to the public again,” said Jen Kimmich, who opened the Alchemist with her husband, John, in 2003. “We missed the daily interaction with our community.”

In the early days, the Alchemist was a 60-seat brewpub in Waterbury specializing in “fresh, unfiltered IPA.” Then came the creation of Heady Topper, the brewery’s first breakout beer. Crafted with six different kinds of hops, it’s one of the most highly acclaimed beers in the world, gaining cult status for its flavor, complexity and virtual inaccessibility beyond state borders.

For fans of the sought-after double IPA, the Alchemist’s nascent Stowe brewery has plenty of Heady for sale in four-packs and two-ounce draft samplers. Four-packs of Focal Banger and Crusher are also available.

Inside the brewery, the Kimmiches strive for a vibe that, according to Jen, is rather “agrarian in nature,” with hop gardens and cherry trees planned for the future. Artwork “continues to be central to the Alchemist’s experience,” as well, she said, with “super-cool murals and art installations” in progress as the space continues to evolve.

In addition to brewing Heady Topper and Focal Banger year round, John will be reviving some “old favorites” from the brewpub days and selling them as special-release beers. There will be no growler fills and no food served onsite, but the brewers are happy to supply a list of local restaurants to hungry sippers. “We don’t want to take customers away from existing businesses,” said Jen. “We want to complement them.”

The couple’s proudest moment since beginning the Stowe brewery, Jen continued, is the creation of 22 new jobs.

“In addition to having fun in the brewery and making great beer, we now have an amazing staff of 46,” she said. “There’s really not one dud in the bunch. John and I sincerely look forward to coming to work and seeing everyone each day.”

The Alchemist’s Stowe brewery and visitor center will satisfy customers' beer cravings from 11 a.m. to 7 p.m. Tuesday through Saturday.