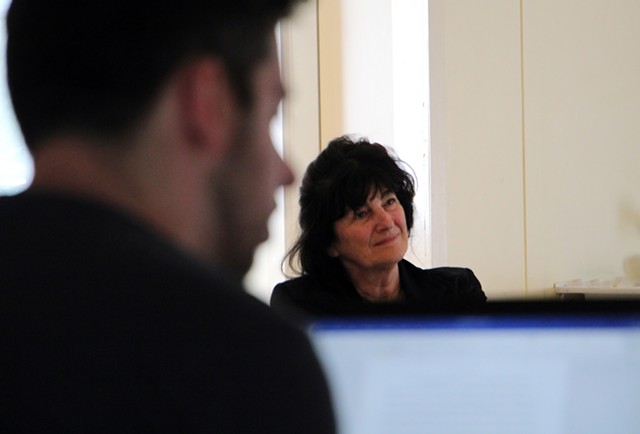 This week’s issue of Seven Days features an interview with renowned food writer Ruth Reichl. Last week, I met Reichl at Sterling College in Craftsbury Common, where she spent three days co-teaching a summer course called “Food Writing From the Farm” at the college’s School of the New American Farmstead.

There wasn’t enough space to run the entire interview in print. Here are extended questions and answers from our front-porch conversation on the Sterling College campus:

SD: In a recently published book by Bee Wilson [British food journalist and historian] called First Bite: How We Learn to Eat (December 2015), Wilson states that it’s not only important to tell children to eat their vegetables, but to get them to want to eat their vegetables. She says the same statement holds true for adults. Do you think Vermont does this well? Can Vermont be role model in the national food community?

RR: [Vermont] is perfectly set up since [it’s] already one of the agricultural communities in America. The biggest way children learn to eat their vegetables is by seeing vegetables grow and helping to grow them. It’s one thing to throw something on a kid’s plate and say, “Eat this.” It’s a completely different thing to say, “Help me grow these peas.” And because they’ve grown the peas, they’re interested in eating them. To do that, you must integrate the Vermont farming community into schools in every area.

One huge difference between Vermont and a place like California is that so many facets of California farming have now become elitist. This is not true if you’re in the valley, like Fresno. But if you’re one of the farms that supply restaurants like Chez Panisse or farmers markets in San Francisco, you are seen as elite, as a privilege. In Vermont, farms aren’t seen as elite institutions; they’re part of life already.

So [Vermont], probably more than any other state, is really in a position to integrate the farm economy into people’s everyday lives. That’s one of the reasons I’m here at Sterling College. I’m not getting paid to do this. Sterling is training a generation of farmers in a really good way, and I’m here because I think that’s important.

SD: Can you tell me more about the class “Food Writing From the Farm”?

RR: There is a whole group of [teachers] here for the course. We’re alternating: Scott Peacock [James Beard Award-winning chef of American Southern cuisine] starts tomorrow. My piece in the class is to talk about voice. I’ve been writing about food for 50 years; I’m here to make myself and my experience available.

SD: Being here, what tastes stand out to you as inherently “Vermont”?

RR: I live in the Berkshires, so it feels very much like home here. For me, Vermont is very much about The Mountain School in Vershire, where my son [Nick] went. It’s a “semester school,” and you go one semester during your junior year of high school. It’s a farm that’s also a very rigorous academic place. It literally changed Nick’s life being there, and the same goes for many of the urban kids that attend. They learn everything through the farm.

SD: In a recent Seven Days cover story titled “How Can Farm-to-Table Restaurants Survive?” [April 20], Hannah Palmer Egan found that the cost of maintaining such a restaurant in Vermont is often at odds with creating a sustainable work life for the owners. How can farmers and chefs work together to create a system that functions in the long term?

RR: That’s the biggest question there is right now. And it’s not just farmers and chefs; it’s farmers, chefs and eaters everywhere. How can we move [the notion of farm-to-table] out of an elite thing? Right now, we have the most bifurcated food system the world has ever seen. Right? If you’re a “rich” person, you can eat food grown in beautiful soil that has never been touched by pesticides. Food is seasonal, and it’s grown nearby. If you’re a “poor” person, you are relegated to stuff that is cheaper than food, and it is essentially killing you.

SD: As a team — the chef, the farmer and the eater — should people expect to pay more for food?

RR: I think that’s certainly one way of doing it. One of the things that’s exciting about restaurants is that chefs have been leading the changes in American food since the ’70s. We have chefs like Alice Waters and Larry Forgione to thank for the proliferation of farmers markets. Nationwide, chefs have been leading the way in sustainability issues as well as hunger issues. And I think one of the newest responsibilities for chefs is changing what we think of as a meal.

We have the cheapest food that the world has ever seen. It’s a real problem. There’s so much wrong with the factory raising of animals for cheap food, and the hidden cost of those animals is enormous. As a society, we need to factor those costs in and ask: What is the real expense of all this cheap food? If we can’t afford to eat chicken every night, we need to rethink what we consider a meal. You can’t wake up with bacon and eggs, then have a hamburger for lunch and fried chicken for dinner. That’s really wealthy eating, and the world can’t sustain that. We need to go back to a different kind of diet, and I think chefs are the ones who will have to lead that charge.

SD: What are some other issues people are grappling with in the kitchen right now? Both for restaurants and for home cooks?

RR: In restaurants, the big issue is tipping. Restaurants are now trying to give their servers benefits and an hourly wage. There’s still this notion that the customer doesn’t technically have to give their waiter gratuity. Excuse me, this person just worked for you. It is not at your discretion.

For home cooks, the biggest issue is social justice for food workers: people who work in meatpacking plants, for instance, or people who pick produce. Food workers are the worst-paid people in America. One of the reasons our food is so cheap is because we’re essentially exploiting a vulnerable population of undocumented people. We ran this “tomato slaves” piece in Gourmet [“Politics of the Plate: The Price of Tomatoes,” 2009] about the issue.

SD: I remember Gourmet publishing many articles about food ethics and politics under your editorship. “Consider the Lobster” (2009), for instance; it’s one of my favorite pieces of writing.

RR: It’s funny, I’m writing the Gourmet memoir now. The “Consider the Lobster” piece [by the late writer David Foster Wallace] was in so many ways a turning point for me at the magazine, and for the magazine in general. [Wallace] extrapolates from lobsters: “Is it right to kill sentient beings for our gustatory pleasures?” Then he takes it one step further and says, “Isn’t asking these questions what it means to be a gourmet, or is it really just about aesthetic?” I was terrified half a million people would cancel their subscription — what we got was the opposite.

SD: In your latest cookbook/memoir, My Kitchen Year: 136 Recipes That Saved My Life, you write, “When you cook for people, they feel cared for.” How are restaurants currently getting that sentiment right, both nationally and in the Vermont community? 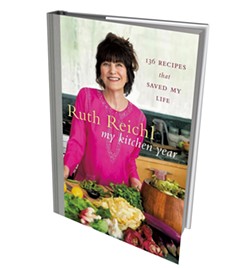 RR: I don’t know restaurants in Vermont. Every place I’ve wanted to eat has been closed for the couple of nights that I’ve been here! Nationally, then: Certainly Dan Barber with Blue Hill at Stone Barns. Hugely expensive, but to me it’s worth saving up to go there. Chez Panisse: Alice Waters has been feeding people with love and gumption for 40-something years.

SD: I recently reread your book about your mother, For You, Mom, Finally (2009). In the book, you say that your mother was part of an unlucky generation of middle-class American women who wanted to work outside the household but could not. You also defined one of the keys to happiness as having a fulfilling work life. How do you define “fulfilling work?”

RR: Every job I have done I would have done for free. Good work is work that doesn’t feel like work. I feel that we are some of the luckiest women who have ever lived, and we are surrounded by women who don’t have the opportunities that we have. We are betraying them every time we waste a minute of our lives doing things that don’t feel important to us. So few of our sex have had those opportunities so far in the world. I truly believe that being able to do fulfilling work is the greatest privilege.

RR: I love [Gabrielle Hamilton’s] book. She’s a fantastic writer. I think she changed the recent writing about food. She’s the first woman chef who wrote about cooking in a way that is not the typical macho, muscular, testosterone-laden style, like Tony Bourdain [American chef, author and television personality]. I think there are pages of writing that are just extraordinary.

RR: There are so many. I love the sound of a wood thrush. There’s an explosion of dandelions recently in Vermont — it’s like the yellow brick road, it’s so beautiful. The smell of onions caramelizing in butter. The smell of rain on the sidewalk in New York. Lilacs, when the lilacs come out. Fresh strawberries. One perfect peach.

RR: What a question. We’re dreaming, so I’m going to go far away. I once went to a sushi bar in Tokyo, Japan, that forever changed my idea of what sushi could be. It was a seven-seat bar and I was there with six friends; we took up the entire spot. I would go back for that meal.

SD: Did you have a favorite bite?

RR: Every single piece of fish [the chef] gave us was the most amazing piece of fish I ever ate. But there were sea urchins from Hokkaido that were really spectacular.

SD: If you could spend all day tomorrow exploring one part of Vermont, where would you go?

RR: I might stay right here [at Sterling College]. I would meander around and munch my way through the state.

SD: In My Kitchen Year,  you speak of food as a form of comfort during a particularly hard year of your life. You seek comfort in recipes ranging from congee to apricot pie. But do you have one dish that acts as your go-to “reset button?”

RR: I always have homemade chicken stock in my freezer. When I’m feeling like I need it, I will heat chicken stock, stir in an egg, throw in some spinach, and grate in some Parmesan cheese. It’s a perfect combination of flavors for me.

INFO
My Kitchen Year: 136 Recipes That Saved My Life by Ruth Reichl, Random House, 352 pages. $35. To learn more about the School of the New American Farmstead, visit sterlingcollege.edu.