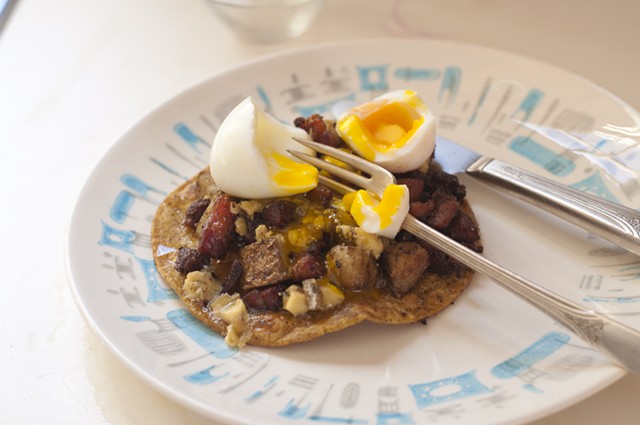 The first time I cooked Easter dinner, I was newly married and barely 24 years old. I brought home a hulking ham from the butcher and set out to roast it one April morning. We may have had a few guests — another couple, a cousin, maybe a neighbor or two — but it was a big piece of meat and we knew we'd have lots of leftovers.

I cracked open my well-loved Joy of Cooking and flipped to the page about hams. "Eternity," it began, "is two people and a ham." My husband and I had a good chuckle. Then, as the book foretold, we ate ham for weeks — with eggs and in soups, in burritos and tacos and casseroles and plain, with potatoes or pasta or whatever else.

Over the years, our memories buffed that newlywed ham to a mythic sheen. We still laugh about it, and I still over-portion at holidays, particularly at Easter, with the ham. The thing with ham is that it's cured, so it keeps well. And it's good with just about everything.

This Easter, I had a picnic-size leg (my mom and I split a whole ham, so I had two smaller roasts, rather than one huge one), but we're still working on finishing it. (See last week's post, with the baked eggs and ham.)

Today, that meant ham-and-potato tostadas, made with beautiful Vermont corn tortillas from All Souls Tortilleria in Waitsfield, ham from last fall's pig, waning potatoes from 4 Corners Farm in Newbury, blue cheese from Boucher Family Farm in Highgate, and honey from Heavenly Honey Apiaries in Monkton. And an egg from my egg lady at the Miller farm, which is a few miles from my house at the top of South Road in Bradford.

Breakfast doesn't get more local — or more delicious — than that.