This week’s Sugar High! is a celebration of pie. And for good reason: Today is when the calendar aligns with the first three digits of one of the world’s most enchanting numbers: pi. Actually, if you round up 3.14159 you get 3.1416 or  3/14/16, making today's date very special indeed.

Vermont has many, many wonderful pie makers. I've sampled a few, but I decided to make my own pie this time. On this 3/14, I will be eating a slice of peach pie with a mound of Vermont-made Wilcox vanilla ice cream, drizzled with a bourbon-maple caramel sauce.

The creation was inspired by a beautiful bag of frozen peaches I picked up from City Market a few weeks ago. It’s a basic peach pie, with a butter and shortening crust. I favor combining the two fats instead of picking one. The result is a totally flaky, light, buttery crust. 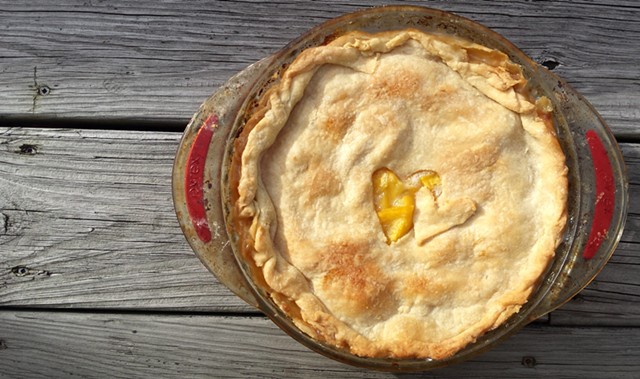 What makes this pie special is the sauce. If you’ve previously failed at making caramel, like I have , don’t run away. This caramel is simple and, as long as you’re watching the pot, it’s hard to mess up. The trick is to let the sugar mixture cool slightly before adding the cream.

I used a bourbon barrel-aged maple syrup from Smugglers' Notch Distillery. Any real maple syrup will do. You may be tempted to salt the sauce, but let me ask you this: Would you salt your bourbon? H That’s what I thought. I generously salted my first batch and ruined it. Let the whiskey shine — it doesn’t need salt.

If I made this again, my only change would be to add a dash of cinnamon to the fruit mixture.

Ingredients:
For the filling:
For the crust:
For the sauce:
Preparation:
* If you don't have a 1/8 cup measuring cup, fill 1/4 cup equally with syrup and bourbon.

Note: Store sauce in an airtight container in the refrigerator. Use within a week.