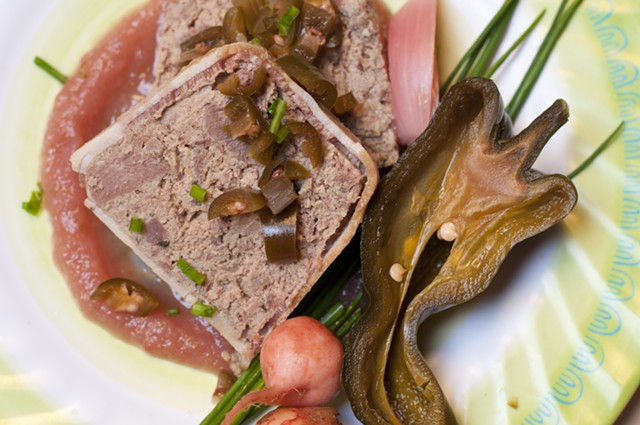 In the interest of transparency, I'll admit that this is my first attempt at forcemeat pâté en terrine.

Between soaking the liver, braising the tongue and shank and letting the assembled terrine rest a few days after baking, it took most of a week to make. It's a project dish, but it's not horribly labor intensive — it just takes time, and the rewards are quite lovely. After making this, you'll feel a keen sense of accomplishment.

This recipe isn't perfect, but it works very well. It's also fundamental enough to be flexible, so you can use whatever random organ meats you prefer. Because everyone has organ meats just kicking around, right? If not, use whatever is available at the store. Healthy Living Market & Café in South Burlington is my go-to shop for local organ meats, but your town butcher (or often farmers) should be able to provide liver or brains or bones or tongue with a little notice.

For this first run, I used about a pound of pork liver because that's what I had on hand. Next time, I'll use less, as the finished pâté was a little iron-rich for my taste. Also, I'll flambé the liver in brandy before processing it — I meant to do that this time but forgot. But serving the sliced terrine over homemade apple sauce offered similar ends (adding a touch of fruity sweetness) by different means.

You could substitute chicken or beef livers for the pork, or pig's tongues instead of beef — or heart meat for tongue, or pork butt for the lamb. The idea is to stud a liver/bone-stock matrix with hunks of long-braised organ and skeletal muscles. But the quantities and specific kinds are fairly negotiable. If you're worried your terrine won't cohere, add an extra egg.

The only non-negotiables are the liver — at least half a pound of it, from whatever beast you prefer — and bone stock. I always stress how much squirreling stock will help your cooking, and this is a case in point. Roasting a chicken for a weeknight dinner? Boil the bones with mirepoix (stock veggies) for several hours, strain into a quart container and freeze it ’til you need it.

Ingredients:
Preparation:
* The USDA-Food Safety and Inspection service recommends cooking livers and other organ meats to an internal temperature of 160 degrees. Consuming raw or undercooked meats, poultry, seafood, shellfish, eggs or unpasteurized milk may increase your risk of foodborne illness.

Update, April 5, 2016: This post has been updated to reflect USDA food safety recommendations.