In America, we live and die by bacon — what carnivore can argue with the salted, smoked belly of a beast, fried to an irresistible crisp in its own fat?

Even as pork lovers decried recent studies linking cured meats to cancer, our food culture seems to be suffering from a bout of bacon fatigue. On December 30, I nodded in agreement when longtime Farmhouse Tap & Grill barman Jeff Baker (now at Farrell Distributing as a beer/cider educator) panned "International Bacon Day" via Twitter: "May I just say...FUCK BACON," he wrote. "Grow up. Be your own person. Find a food that's actually interesting." Baker wasn't alone in his ire. And it's worth noting that the phrase "bacon fatigue" — a term I thought I just made up — was added to Urban Dictionary in May 2013.

So while I'll be the first to cozy up to a tater-tot poutine smothered with bacon gravy, my affection has lately shifted to another porcine preserve. Guanciale is Italian cure made with pig cheeks, and it's a lot like bacon: mostly fat with meaty striations, salty and porky and impossibly rich. And it's super easy to make.

Having never cured any meat in my life, I made one last winter. I tossed it into a carbonara, sprinkled it over a salad, and then kind of forgot about it. Its flavor was strong — pointedly pungent and too intense to eat except in the tiniest quantities. I stashed it and spaced it, vaguely hoping it'd get better with time. Then I rediscovered it in my crisper a month or so ago.

With guests at the table, I hacked off a fat strip and served it in tiny bits with cheese. It was incredible. Creamy and chewy and complex, its flavors had mellowed with age. Gone was the harsh sting I'd encountered before. It's lovely in pastas, salads, dips or entrées, eggs — anything, really. Like bacon, but way more interesting.

I had to make it again — and this time I decided to make two instead of one.

I called up Holly Jeffries at Sugar Mountain Farm (this family recently began butchering its own hogs on-farm), ordered up a couple jowls, and started my cure over the holidays. The recipe is easy — all you really need is meat, salt and patience — and it's an accessible point of entry for folks who are interested in curing meat at home. 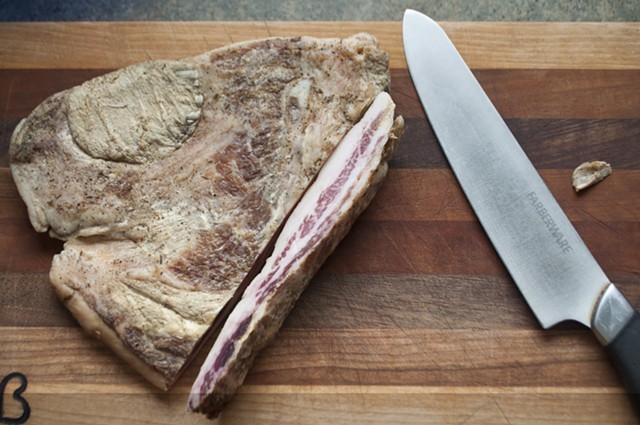