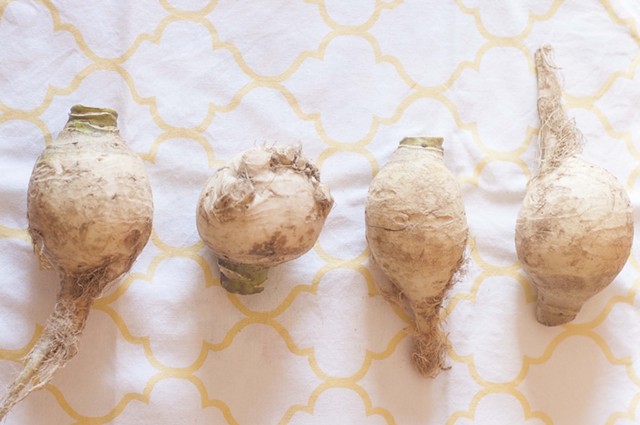 It's been a warm month so far, by November standards. But it's still soup season, and root vegetable season, and I find few lunches more gracious than a well-garnished bowl of bisque and a hunk of crusty bread.

This recipe adds a touch of garlic and smoke to the rutabaga's subtle, earthy sweetness. It's a rich and roasty soup that's smooth and calming and loaded with flavor. But it's not heavy. I added half a cauliflower because I had it, but it's by no means essential, and it's a cinch to make a vegan version.

Usually bisques are weighted with heavy cream. Since rutabaga will soak up a lot of liquid before it thins to a proper bisque, I used half and half instead. Dairy-free folks could swap coconut milk for a similar effect. And, while most soups are only as good as the stock that grounds them, this one works as well with water as the other base liquid. Salting and roasting the roots first gives the purée ample flavor to withstand dilution.

What's more, the roasted roots, puréed with just a little water or cream, make a lovely mash that would side well with a roast chicken, duck or turkey, since Thanksgiving's coming.

Not sure where to find rutabaga? Mine came from Full Moon Farm, but they vegetable is widely available at winter markets, or at your local market.