It's no surprise that I'm usually the first in my crowd to know about any new dining spot. But when one pal recently sent me a picture of some fried balls filled with macaroni and cheese, I'd never heard of its source. Turned out, it was Berdas Roadside Eatery, parked at the Essex Family Fun Center, right between the batting cages and mini golf.

Then my girl Jess Wisloski sent me a link to her piece on the place from the Colchester Sun. When a reader sent me yet another recommendation for Berdas last week, my fate was sealed: It had to be the next Alice Eats.

I liked the old-fashioned branding on the trailer (omitted apostrophe and all), but the food was anything but. Indeed, so much of it was idiosyncratic, it was hard to know if I was making the right choices.

Among the hot dogs, should it be the Whistlepig, deep-fried in a jacket of bacon and drizzled in maple syrup? Or the Jalapeño Dog, grilled and then topped with maple-flavored jalapeños and onions and settled into a bun "that's been loaded with cream cheese?" Yes, I could have just ordered a plain hot dog, but it wouldn't have shown me what Berdas is about.

In the end, it had to be the Breakfast Dog. At the center of the griddled bun lay a snappy 3/4-pound Vienna Beef dog. Piled on top was was a hot, crisp-edged fried egg, chunks of bacon and crunchy cubes of maple-glazed onion. For me, it fell more in the category of "interesting" than good. It wasn't that the combination didn't work at all. It just didn't synthesize quite as it should have; sweet and salty notes were so powerful that they ended up adrift on their own.

It's hard to avoid maple-flavored veggies of some sort at Berdas. Call me a curmudgeon before my time, but I would have enjoyed the sliders more without the glaring sweetness of the onions. Incidentally, they were described on the menu as caramelized and were far from achieving the softness I expected. The tiny cheeseburgers themselves were perfectly good, thin examples of snack-bar cuisine, with the added cachet of being made from local, grassfed beef.

The onion rings were the only onions I tasted that day not drowned in maple, so the veggie's natural sugars got to shine from beneath a thin, salty and peppery coating. I would have appreciated a more thorough cook to take away some of their internal crunch, but the rings were flavorful enough on their own that I barely used the provided ranch dressing. 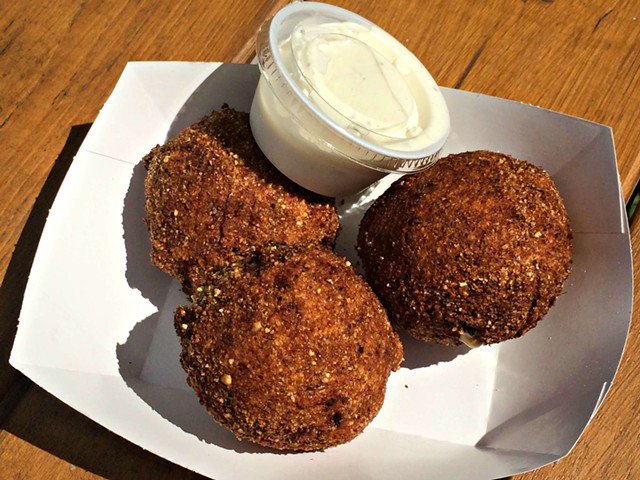 Ranch was a less natural pairing with those mac-n-cheese balls. My friend who first told me about them revealed that he preferred the fried snack "to a blow job." Quite a statement from any man. I can't know if I would feel the same way, but the crispy balls were my favorite item at Berdas.

I lucked out to get them at all. Usually, the smallest order is a $3.75 collection of four. There were only three left, so I received mine at a discount.

Inside, skinny noodles were coated in tangy orange cheese with a dash of paprika. It was a damn good, surprisingly complex sauce, only marred by the mushiness of the pasta itself. The crispness of the salty cornmeal crust helped, but all the same, it was hard to make myself eat more than one of the heavy little bombs.

As regular readers know, I'm all for a bacchanal of fat and salt, but even for me, the food at Berdas was just too much. Next time, I might order that plain hot dog after all.