Seconds of Summer: A Tasty Tour of Jazz Fest 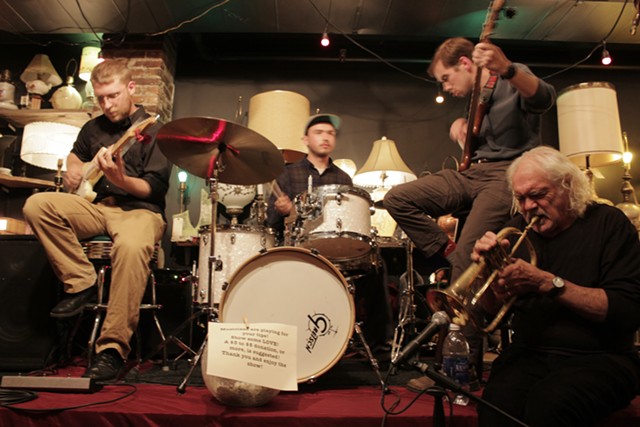 Burlington Discover Jazz Festival had a dampened opening with Friday night's downpour. With the skies much less ominous on Saturday, a friend and I mapped out a rough score for the night. It sounded pretty good: three venues that would satisfy our appetites for food, drink and music. First up was the Daily Planet to sample its new summer cocktail menu, then down to the American Flatbread outdoor patio for pizza. To cap it off, we planned for some late-night dessert at the Light Club Lamp Shop.

At about 8, my friend and I waded into the candle-lit lounge at the Planet and seated ourselves at a low table among a small crowd. Hot Pickin’ Party, a bluegrass trio and DP regular, crammed onto a tiny platform raised against the back wall and played powerfully from the shadows. We were happy to be sitting by the big, open bar front and thanked the rain gods that had graciously taken the night off.

Shortly after an attentive waitress offered waters and drink menus, we decided to embrace the fine summer evening with a couple of DP’s latest potables. I chose the Beach Comber, as it seemed the most tropical of the bunch with two types of rum, pineapple and homemade falernum. My friend ordered the Copper Cup, a gin drink named for its dark orange hue, and not the metallic vessel I hoped would be part of the presentation.

We enjoyed Pickin' Party's acoustic twang and steel guitar along with a lead vocal that rose above the bar chatter. Our glasses arrived to the refrain, “This heart of mine is made of silver / This heart of mine is made of gold,” and seemed to shimmer in the candlelight. The Beach Comber was exactly what I was looking for: a spinoff piña colada served on the rocks. It was frothy and fruity, and the Bacardi stood front and center. The Copper Cup didn’t awaken my senses quite as much, but my friend found it light and refreshing. I thought the muddled mint slightly overpowered the splash of citrus and the drop of Pimm's liqueur.

By 9, we were ready to end our liquid diet with some real food at American Flatbread. The cool night carried bits and pieces of sax solos and hi-hats as we worked our way down to the pizza hearth. I thought we had arrived mid-set, but the host informed us that a delayed Left Ear Trio was just cuing up. We followed him to the patio area, which was relatively empty at first but filled in after the band warmed up with some sweet guitar licks and a tight display of the twos and fours.

We believed our stomachs could handle a large pizza, so we went for Flatbread’s Revolution pie. It’s topped with cheese, mushrooms, caramelized onions and fresh herbs (nothing too revolutionary), and we personalized it with free-range chicken.

When the server delivered the massive round to our table, we knew we had gone a bit overboard. For two people, it would be a feat to finish. Nevertheless, we dug into piping-hot slices, which Flatbread cuts horizontally rather than in classic wedges. Our poultry addition proved to be a sound choice. It came shredded and baked into the cheese, which gave the pie great texture. The tomato base had a touch of sweetness, but I was craving more of the caramelized onions. A welcome departure from dense, grease-soaked dough, Flatbread's thin crust is soft and perfectly crispy. I might have abandoned the cheese-less bits if they didn't taste so damn good on their own.

We took the last third of the pizza to go and prepared for part three of our trip. At quarter to 11, we squeezed into the Light Club Lamp Shop, where a makeshift stage held a jazz quartet in the central lounge area. The Lamp Shop was definitely the most jazzed-up venue, and a copious array of antique lamps illuminated the lively crowd. Heads bobbed to slick bass grooves, which conversed with riffs from a wandering guitar. An intermittent trumpet blasted into a mic and scattered scales onto our table as we considered the dessert list.

At two dollars apiece, the elderberry balls intrigued us enough to try them. The pair of dark spheres didn't look like much on the plate, but breaking through the dark chocolate shell, we discovered an intensely rich chocolate center spiked with elderberry cordial. The super-decadent, semi-chalky ganache packed a punch, even for a chocoholic like myself.

The band was finishing off its final number as I came back from my chocolate dream. I inquired of the bassist the name of his eclectic crew. He hesitated before inventing the name Pat Markley Group. "We've never played together," said Pat Markley. "It's just a group of guys I got together. It was really last minute."

Then Markley rushed out, leaving me even more impressed with the improvised performance. I headed home myself at midnight. Our jazz fest journey left me satisfied, with a slight ringing in my ears and a night full of tunes and tastes to remember.