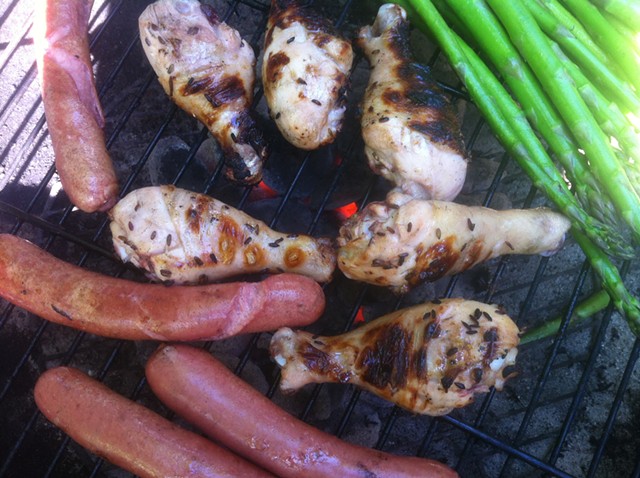 Yesterday was Memorial Day, which means summer is now officially here. Which can only mean as much grilling as possible. While the weather is warm, I'm inclined to throw anything over the fire — meat, veggies, starches, whatever — almost everything tastes better when kissed with a bit of flame.

Part of the grill's allure is that meals are nearly ready-made: Just grab something quick, light the grill and throw that something on (maybe marinate it, if time allows), and voilà! Dinner.

But some hot dogs and burgers are better than others. So instead of offering my usual Farmers Market Kitchen recipe, here's a roundup of my favorite, farm-fresh or locally made foods to roast al fresco — and, for good measure, a fun little 30-minute marinade to zest up your drumsticks.

Hot dogs: I often default to McKenzie's beef franks, as they easily meet the juicy hot dog standard, and they're widely available. But this season, Vermont Smoke & Cure debuted a new bacon hot dog — made with antibiotic-free beef, bacon and seasonings, lightly tinged with porcine flavor — which I'll be adding to my summer rotation.

Chicken: For grilling, I'm all about drumettes. Adam's Turkey Farm in Westford sells packages of these chubby little legs — available at South Burlington's Healthy Living and Sweet Clover Market, among other outlets — which are just perfect for the fire. Last weekend, I soaked these in a lemon-lavender marinade (recipe below) while the grill heated up, and they were fabulous. If you can't find Adam's, any drumstick will do.

Beef: For burgers, Boyden Farm's grass-fed ground beef is always a fine bet, but our fair state is filled with other excellent local choices. In Chittenden County, LaPlatte River Angus Farm consistently turns out excellent burger meat, as does Maple Wind Farm. And the list goes on — if you don't usually think to buy meat at your local farmers market, now's a great time to start.

Lamb: If you see lamb kebab meat — perhaps at Shelburne's Green Pasture Meats, or from Tamarack Vermont Sheep Farm in Corinth, grab it, dust it in salt and pepper and maybe some paprika, and serve it over tabouleh. Boomcakes. Also, why not grill a rack of lamb? That's fun, too.

Veggies: Right now asparagus is proliferating, but it won't be much longer. I grabbed some from a friend the other day, but dozens of farms statewide grow it and truck it to market. Later, swap that with broccoli rabe, then summer squash, then eggplant, peppers, halved tomatoes, cauliflower and cabbage. They all take well to the flames. If you've got a cast-iron pan, fill it with smaller summer crops: cherry tomatoes, greens for wilting, berries, grapes, whatever. Just toss them in olive oil, salt and pepper, and roast away.

Now, about that chicken marinade.