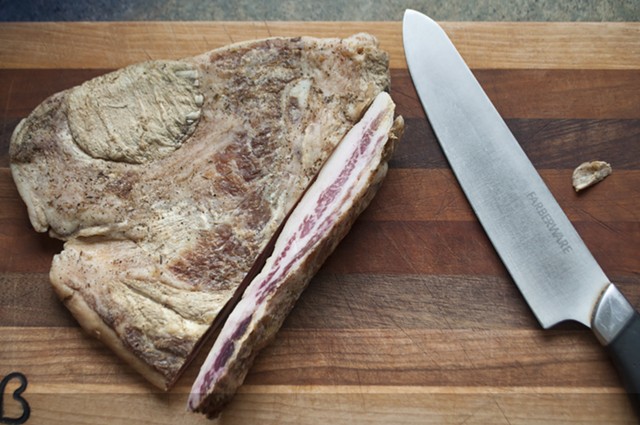 I bought a pork jowl from Pigasus Meats at the Burlington Farmers Market back around Thanksgiving and it's been curing into guanciale (similar to bacon, but dry-cured instead of smoked) in my pantry ever since. I've also been thinking about eggs a lot, which could really only mean one thing: I was going to make pasta carbonara.

This classic Italian dish has murky origins. Most people who have opinions on the matter trace it to somewhere around Rome, but exactly where and when it originated is widely disputed. Like all Italian home cookery, carbonara's ingredients and technique vary from kitchen to kitchen. Some cooks use garlic, onions or other allium, while American chefs are wont to add cream or milk, peas or chicken. Often, they'll go light on the sauce and top the dish with a poached egg or raw yolk, adding an extra dose of cholesterol-laden richness.

Despite this variety, everyone seems to agree that the dish contains the following: cured fatty pork (usually guanciale or pancetta, but slab or thick-cut bacon works, too), egg and hard, grainy cheese, such as Parmesan or pecorino, and pasta water. Pasta water is the glue that ties it all together.

For my version — which I daresay is fairly true to the Roman standard but made with local ingredients — I went with a bit of garlic and that's basically it. Many cooks will sauté whole cloves of garlic with the pork and then remove them before serving, so it's present in scent only. I diced it and left it in the final dish because I'm afraid of vampires. For cheese, I used Bridport Creamery's goat/cow Champlain Valley Tomme. It falls somewhere between a Parmesan-style cheese and something more alpine. Then I added diced scallions for the garnish, mostly because it looked pretty and presentation is half the battle.

The real trick is to use great ingredients and to time it all just right. Everything has to be nice and hot — but removed from direct heat — to get the eggs, cheese and pasta water to congeal into a nice, rich, creamy sauce. If it's not hot enough, it'll be like raw egg pasta soup: Yuck. If you don't remove it from the heat, the eggs will scramble. Fried egg pasta — also yuck.

But, take the care to get it right and it's a glorious, filling, impressive and surprisingly simple dish.

Perfect Spaghetti Carbonara
Serves 2 as a hearty entrée; 4 as a smaller course