January 16, 2015
Things are hard in Vermont in the dead of winter. The ground is hard — frozen stiff, covered with ice and the crusty remnants of a long-ago snow. The sun disappears for days, shrouded in a layer of murky gray clouds, and the nights are long and cold. And, with the wind whipping through our old windows as though they were tissue paper, a warming meal is often more effective against the chill than a wool sweater or heavy blanket.

With New Year's day (and our pesky resolutions compelling us to keep away from overindulgence) now behind us, this bitterly cold week seemed as good a time as any to recall some of our favorite, over-the-top guilty culinary comforts.

We don't see enough foods from the deep South in the Green Mountains. Luckily, Nectar's owner Jason Gelrud is willing to take to his Burlington kitchen once a week to prepare a single dish he grew up loving. But the twist is that his Southern fried-chicken dinner is made almost entirely from Vermont ingredients. Misty Knoll Farms chicken is brined to bursting and fried in a thin, spicy jacket. Mac and cheese is creamy and crumb-topped with a sassy personality courtesy of Cabot Private stock cheddar. A buttery biscuit finishes the meal, along with tangy, pork-suffused collards. — A.L.

Face it: There are not enough popovers in your life. It's an old-fashioned pastry primed for a revival and, thankfully, it's getting a thorough one at Burlington's Swingin' Pinwheel Café & Bakery. The airy, eggy rolls are served stuffed with practically anything that strikes the diner's fancy. A fruit compôte with a giant orb of whipped cream can hit a sweet spot. I've also enjoyed one filled like a breakfast sandwich, complete with moist scrambled eggs, sausage and cheese. — A.L.

The oft-repeated adage that even bad pizza is good makes me wonder. What is good pizza when it's topped with the deconstructed makings of an eggs Benedict? An orgasm? Whatever you want to call it, you're bound to be more than satisfied with the classic Flatbread crust, topped with capicola and Roma tomatoes, at American Flatbread Burlington Hearth. But the key is the fusion of mozzarella with buttery Hollandaise as runny egg yolks flow into every pore of the pie.  — A.L. 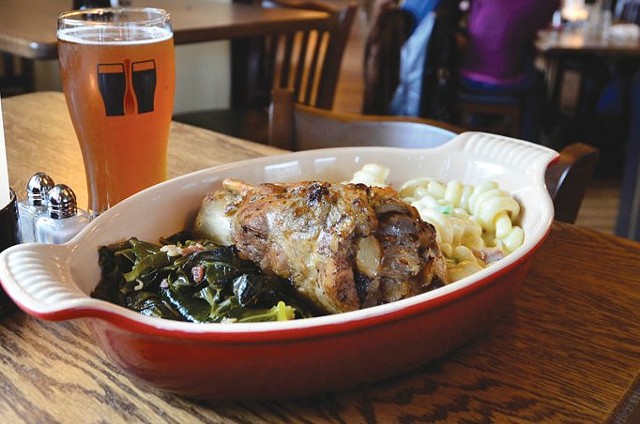 Braised in honey and beer, much like a traditional Polish golonka, there is little old-school about Cornerstone Pub & Kitchen's pork-shank dinner, a meal that could eat most other dinners in a single bite. The fall-apart-tender shank itself is dino-sized, but it requires conscious forethought not to down every chunk of meat that flakes away from the bone. The braised collard greens have their fair share of pork and the mac and cheese, too, incorporates husky hunks of bacon. Jalapeños cut through the blanket-like comfort of the pasta's cheddar sauce, making for a new classic with a touch of the unexpected in Barre.  — A.L. 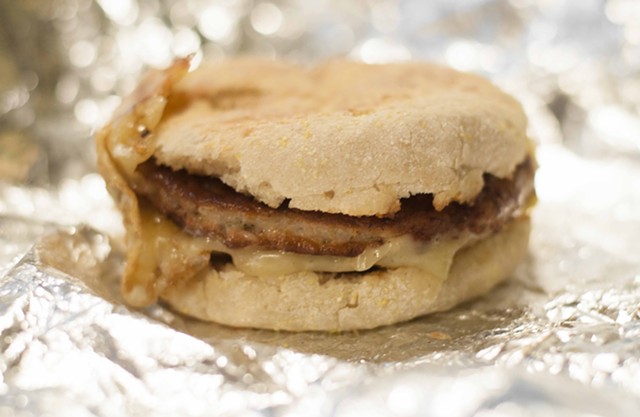 Most days, I start my morning with something resembling a breakfast salad: an egg, maybe a chicken sausage, served over greens, with beans or sautéd vegetables. Sometimes I roll this into a big tortilla for a greeny burrito. Only on mornings when I need to soak up the remnants of last night do I go for the breakfast sandwich. And the best — that is to say the meltiest, most salacious — one I've found in Burlington comes from Pine Street Deli. They do a fine rendition of the bacon, egg and cheese, but I'm also fond of the sausage, egg and Swiss, slathered in hot sauce (they'll do this for you), and slipped between a buttered, toasted English muffin. — H.P.E.

I only recently got to know ArtsRiot's burger. And of all the things on this list, it's a fairly new addition; chef George Lambertson took over the South End dinner spot just a few months ago, and this burger is his creation. Modeled after "fast-food" flavors, this sandwich packs a thinner patty than you'll find at most pubs (it's still a beefy 1/3 of a pound). But topped with bacon, lettuce, tomato and a super-secret "special sauce," on a soft, airy roll, it tastes as naughty as something you might find at a burger chain. — H.P.E.

'Seven Best' is a monthly series in which Seven Days food writers Alice Levitt and Hannah Palmer Egan sing the praises of their favorite examples of a particular dining category.