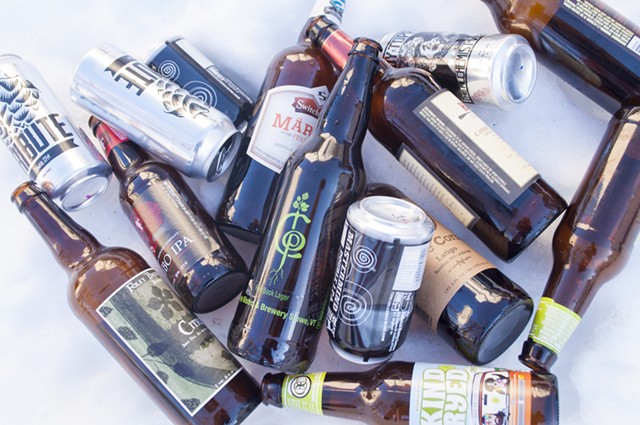 In 2014, Vermont’s brewing industry continued on a path of explosive growth. At least 10 new breweries opened for business, and several established ones staged massive expansions. The state’s brewing capacity expanded monthly in 2014, and more brewers are on track to launch next year.

With so many hops happening, year’s end seemed like an ideal time to look back through 12 months' worth of bottles, kegs, cans and growlers.

In Burlington's New North End, Dan Ukolowicz and Kara Pawlusiak launched Simple Roots Brewing in June. Pouring tastes of legal beers brewed in their home, Ukolowicz and Pawlusiak were a welcome presence at the Burlington and Winooski farmers markets all summer, and their rotating variety of brews — which range from cream ale to pitch-black, barrel-aged oatmeal stout — are consistently good and often fantastic.

Later in the year, Hermit Thrush (in Brattleboro) opened, with a mission to brew barrel-aged and Belgian-style sour beers and lambics.

In December, Northfield’s Paine Mountain Brewing Company also embarked on a full-on production schedule (it had formerly been producing for the adjacent Knotty Shamrock pub; both businesses are owned and operated by Kevin Pecor). On the day after Christmas, Waterbury's Prohibition Pig threw open the doors of its new brewery tasting room. After about a year of brewing on a tiny, one-barrel system, team Pig increased its capacity to about 1,100 barrels per year.

In June, Burlington’s Switchback Brewing Company opened a sleek new taproom, not long after Trapp Lager Brewery broke ground on a new building that will house a huge new brewing operation and beer hall. That should open in summer 2015. Zero Gravity made plans to expand beyond its current American Flatbread space into a bigger production brewery on Pine Street (this also should open sometime next year).

Meanwhile, Alchemist owners John and Jen Kimmich worked to enact a plan that would double the company's annual production with an additional brewing space in Stowe. And in Greensboro Bend, Shaun Hill spent most of the summer and fall building more brewing capacity into his operation at Hill Farmstead.

In St. Albans, on the heels of a major downtown revival, veteran-owned 14th Star Brewing  moved into a former bowling alley, expanding its production capacity from 750 to about 12,000 barrels per year. In mid-December, that brewery introduced cans with a huge food drive for the local food bank.

With all the new beer flooding taplines statewide, old-guard breweries began adding fresh beers to their repertoire at a startling rate. They also retired some longtime standbys: in Bridgewater Corners, Long Trail Brewing Company stopped brewing Blackbeary Wheat, Hibernator and Pollenator, opting instead to release new brews. Last spring, brewmaster Dave Hartmann made a splash with Ramble Kölsch — a deliciously bright, drinkable lager with notes of pepper and citrus. He followed this with other seasonal offerings that grew darker as the months wore on. The culmination is Sick Day IPA, a rich, malty, hoppy bomb of a beer that’ll warm us until the Kölsch comes back. Long Trail celebrated its 25th anniversary in August.

At Otter Creek Brewing in Middlebury, Stovepipe Porter went up in smoke, and brewmaster Mike Gerhart continued to broaden the OCB flavor profile. He added several heady, hoppy releases — packaged in colorful psychedelic labels — to the brewery's seasonal rotation. Spring brought the single-hop Citra Mantra, followed by Fresh Slice, a citrusy white IPA for summer. Overgrown, a super-hoppy pale ale, arrived in fall, and Kind Ryed IPA debuted in late fall. If the bird in my ear is correct, look for more exciting new things from Gerhart and OCB in 2015.

Over in Morrisville, Rock Art brewery founder Matt Nadeau continued to play — as he has done for years — with big, bold flavors. His Galaxy IPA (brewed with single-variety Galaxy hops) was one of my favorite beers of the year, and his bourbon-barrel-aged wee heavy Scotch ale is a serious fireside sipper.

Despite some minor IPA backlash (several new brewers said they were focusing on other than high IBUs), the IPA dominated this year. In May, Foley Brothers introduced Fair Maiden DIPA. It was one of the best brews to hit the market in 2014, though at Fiddlehead Brewing in Shelburne, Matt Cohen’s Second Fiddle and Mastermind DIPAs are in the running. I also sipped a killer DIPA at Burlington's Vermont Pub & Brewery this summer.

Arguably the biggest thing in Vermont beer this year was the portable, nonbreakable, camp-worthy can. Heady Topper paved the way for craft brews in aluminum (the Alchemist also began its truck-can sales in February). Several breweries — Fiddlehead and 14th Star among them — worked with mobile-canning lines to release pint-size containers of sippable joy.

Larger breweries — such as Long Trail and Otter Creek — continued to can more brews than in past years. Sean Lawson has been working solo and struggling to meet demand at his tiny, seven-barrel brewery in Warren. Just weeks ago, he shipped his Sip of Sunshine production to Two Roads Brewing Company in Connecticut, releasing cans of his bread-and-butter IPA.

Despite the increasing competition for market share, brewers continued to collaborate. This summer, Trapp Lager Brewery and Crop Brewery beer men J.P. Williams and Will Gilson got together to brew an excellent bock for fall. Vermont Pub brewer Russ FitzPatrick teamed up with Sean Lawson on a fun IPA brewed with spruce tips. And these were just some of the collaborative works of drinkable art.

In August, Growler Garage opened in South Burlington with 20 beers on draft and workshoppy programming aimed at educating the casual drinker. In partnership with Farrell Distributing, the shop hosted the inaugural Girls’ Pint Out event in mid-December. The Vermont chapter of the national organization aims at bringing beer girls together for conversation, education and, yes, beer.

Finally, here are my picks for the best — or most memorable — beers of 2014. Most were new this year, but a few released in previous years really made their mark on the suds-saturated year that was 2014.

What did I miss? Please scratch an itch/pick a bone in the comments.

Correction: An earlier version of this post incorrectly stated that Long Trail and Otter Creek brewing companies had their own canning lines. Like the other breweries mentioned, both use the services of Iron Heart Canning.