I've had a pumpkin (from Shelburne Farms) in my pantry since September. And now that Thanksgiving has come and gone, it seemed like high time to use it. I wanted to do something more original than pumpkin pie or bread, so I flipped to the index of Craig Claiborne's The New York Times Cookbook, published in 1961, and looked up "pumpkin."

Aside its really thorough index (an advantage of most old cookbooks), the most wonderful thing about the late Times critic's seminal work is that most of the recipes are pretty foolproof, and they don't call for esoteric ingredients or equipment. Anyone with an oven, a hand mixer and a set of mixing bowls can make this stuff.

In the "Puddings, Custards and Other Desserts" section, Claiborne offers an old-fashioned, soufflé-style pumpkin pudding, and I had to make it. I updated the seasonings just a little (swapped out his cloves for my allspice and added a splash of fragrant bitters) but kept the bones of the recipe the same.

For the pudding:
For the cream:
Preparation: 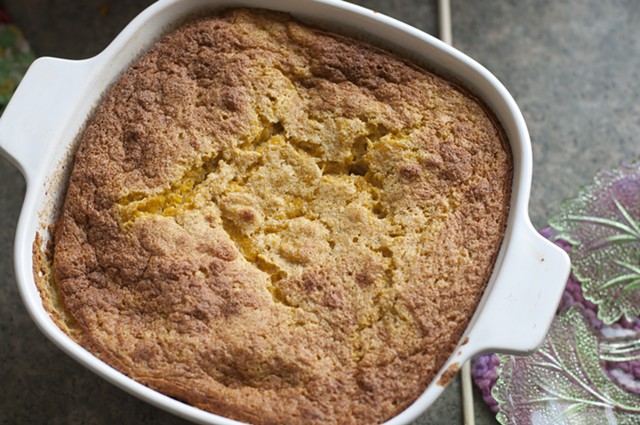