Avoiding carbs, Pilgrim? Not at Burlington's newest breakfast spot. The Swingin' Pinwheel Café & Bakery is a temple to all things fluffy, flaky and chewy. A visit may necessitate a cowboy's level of activity to burn it off, but in my experience, it will be worth the effort.

The Pinwheel is literally a mom-and-pop business. Mom is Wendy Piotrowski, late of Patra Teahouse. Pop is Andrew Machanic, who started his career cooking at guest ranches out west when he was 17. Their progeny is there, too. Baby Waylon smiles at guests from his playpen stuffed into a nook behind the cash register.

The menu is small but tightly packed with original ideas. Big, light popovers are stuffed with fruit or eggs and cheese. Haystack Hashbrowns are something like rösti, topped with the diner's choice of sweet or savory breakfast treats. I did my best to eat my way through the little café for $35, but already have plans to return for new additions such as the Basque Breakfast — composed of two poached eggs and toasted focaccia with spicy tomato-white-bean stew — in the near future. 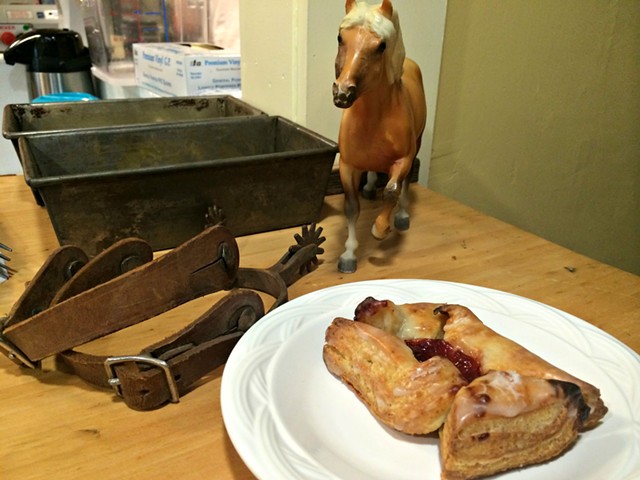 But on Saturday, the first order of business was to tear into a pinwheel. The pastry, which Machanic started making with his mother as a child, floats somewhere between a croissant and Danish in character. Cut into four attached triangles to achieve its pinwheel-like shape, every segment is a crispy end piece and is ideal for sharing. I chose one baked with strawberry jam in the middle. Raspberry and apricot versions were also available that day, but I look forward to possibly seeing savory versions. Some Gruyère would really hit the spot.

Orange juice was freshly squeezed and speckled with pulp, but I'm unlikely to return to the Pinwheel without ordering the sage lemonade. Served in a Mason jar, the lemonade itself was an ideal balance of sweet and tart. But the secret is the surprising addition of fresh sage. Favorite breakfast drink ever? I think so. 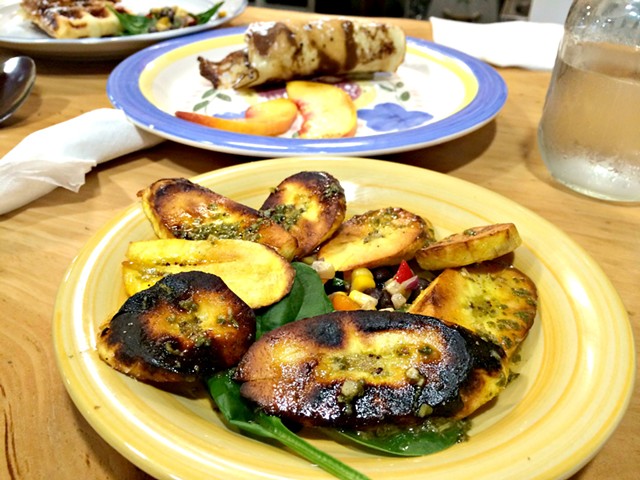 It's impossible for me to see plantains on a menu and not order them. The $3.75 side dish was more food than I expected. Unfortunately, a few slices were burnt. It didn't ruin the flavor, though, thanks to a powerfully garlicky pesto and a nest of Cowboy Caviar, the latter of which appears on most savory plates at the café.

Still, I'm not sure if I would order the plantains again. Not so the Piglet in a Pancake ($4.75). A full-sized version of the breakfast dish is also available, but I'm a girl who likes to eat meat as a side dish. The single juicy sausage was a perfect size. But don't expect the sourdough pancake in which it's served to taste, well, sour. The fluffy flapjack definitely tastes of fermentation, but is dark and nutty with nary a hint of pucker.

For some diners, Machanic's chili ($6.50 for a cup, $9.50 for a bowl) might also defy expectations. Digging for beans will get you nowhere. This is straight-up Mexican style, with braised beef, lots of spices (though little heat) and not much else. Mine came to me lukewarm in places, easily fixed with a good stir.

The corn muffin that accompanied the chili was the only baked good I tried at the Pinwheel that failed to impress. Though strands of cheese stretched out with each bite, the pastry was strangely dry and so crumbly that it was a chore to eat.

All of this was eaten in anticipation of the main event: the wafflini ($6.50 for a half, $11 for a whole). Machanic didn't invent the concept of a sandwich pressed in a waffle iron. But what he did pioneer is using his flaky pinwheel dough in the pressed pastry.

Picture it, Pilgrim: The crisp outside of a waffle with the flaky interior of a croissant. A stuffed croissant. I tried the prosciutto and Gouda version, an excellent combination, drizzled with honey along with the usual sprinkling of powdered sugar. The filling was a bit slim, which may be a necessity of being pressed inside a waffle. But I'll be back to try the Caprese iteration and probably the turkey, apple and cheddar one. If future attempts turn out to be more robustly filled, I'll have a dangerous addiction on my hands.

Especially because it's practically impossible to walk inside the Pinwheel and not leave without with a sweet in hand. On Saturday, I couldn't resist trying the chocolate-mocha Twinkie. But they got their snack cakes twisted. This was a homemade, chocolate-glazed Devil Dog filled with an airy mocha cream. Just one more innovation of the many that are sure to come out of Pinwheel's kitchen. I'll be watching as they appear — and eating my way through them.