I was disappointed when Burger King abandoned its brilliant King advertising campaign, calling it "too creepy." But another king, more cheerful than stone-faced, has moved into Burlington's South End, not far from Seven Days' office. And the neighborhood is abuzz about the deli's sandwiches.

Last night, I put my Alice Eats limit of $35 to the test to see just how much food I could get at King's Corner Deli. Answer: I'll be tasting the royal deli rainbow all week.

My dining partner and I started by scanning the drinks and chips. I can never pass up a grape soda. The uncommonly exhaustive snack-food selection yielded lots of possibilities: Pickle-flavored chips paired with ketchup or cappuccino-flavored ones, perhaps?

A fairly good approximation of movie theater popcorn from the Smartfood folks and Old Bay-seasoned crisps from Herr's won out. The latter was almost painfully salty and all-around sort of weird. But addictively so. Somehow the spice's association with crabs allowed me to scratch an old itch: for the Japanese shrimp chips I OD'ed on as a 4-year-old. For good measure, we also chose a massive, cake-like Junior's Italian chocolate chip cookie.

Despite chips and carefully selected beers aplenty (a shipment of cult suds from Oregon just arrived), sandwiches are the main event. We sat at the single table outside and indulged.

First, a note on rolls. As a native New York City suburbanite, I grew up thinking it wasn't a sandwich (or in my regionally specific case, a "wedge") if it wasn't served on a hard roll. This is a foreign concept here in Vermont. People will tell you it is just a Kaiser roll. I'm convinced that the Kaiser took a slightly different turn when it hit the Big Apple, though, becoming the hard roll. In the Green Mountains, at least, a Kaiser roll simply doesn't flake in the same way.

The Junior's Italian rolls that King's Corner uses don't have quite that crust I crave, either, but they're the closest I've found in the state. So a Pastrami Melt with sharp brown mustard, tangy sauerkraut and stretchy Swiss cheese tastes pretty close to home. The only missing piece is the meat. A New York deli sandwich would surely boast three times the amount of pastrami found in the sandwich at King's Corner. 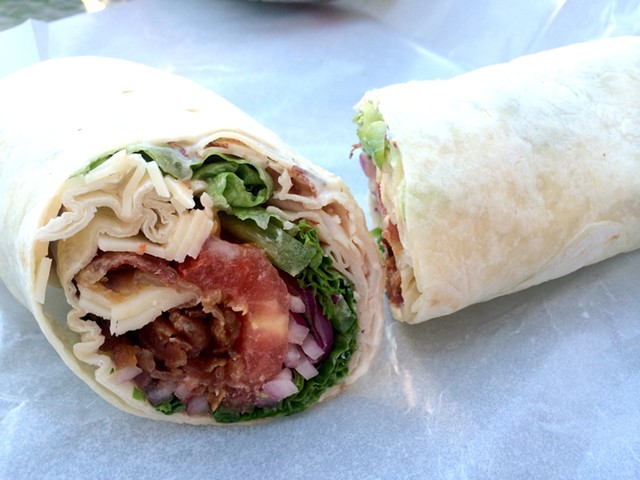 The one time I tried the deli before this review, the bacon on the otherwise excellent roast-beef-and-garlic-mayo sandwich I tried was nearly raw. In the King's Club Wrap I tried last night, it was crisped to perfection. But the supposed centerpiece of turkey was so paltry, it took a few bites to even notice it.

The same went for the homemade ranch dressing that was supposed to be included. I never detected it. But otherwise, the fresh veggies in the wrap made for a satisfying experience. At $7.59, it was also large enough to constitute two meals, a trend I noticed with all the sandwiches, even at the smaller "Queen" size.

Choosing a third sandwich wasn't easy. Would it be the Sloppy Salami, which included horseradish mayo and the deli's "Super Secret" cream cheese spread? The Freshy Italian, an oil-and-vinegar-dressed take on the Caprese, appealed as much as the Royal Italian, which promised "Bema's Special Spread."

But with a name like "The Dank," it was clear that the sandwich above would be well, pretty dank. Sweet McKenzie ham dominated, with a single layer of pepperoni and pickles for extra zest. Horseradish, garlic and Sriracha mayos were combined for a one-two punch of spice with a savory finish. It sounded potentially excessive but worked well.

"Dank" isn't a word I would ever think to use, but, sure, I'll go with it. If "dank" means a deli sandwich this uptight food critic would order again, then dank it is.