A Tour of the South Burlington Trader Joe's | Bite Club

A Tour of the South Burlington Trader Joe's

On Friday, the tiki gods will finally smile on Vermont with the opening of the state's first Trader Joe's. At 8 a.m., expect to see a Dawn of the Dead-style crush at 200 Dorset Street in South Burlington as bargain hunters compete to be among the first to shop at the 12,800-square-foot store.

On Wednesday, I got a sneak preview of the store guided by the store's "team leader" (manager), Shawn Minihane. He's been with the company for nine years. Most recently, he was at the Albany, N.Y., Trader Joe's.

Minihane took me past the still-empty areas where flowers will be sold in $3.99, $5.99 and $9.99 bouquets, as well as "Single & Mingle" style, allowing customers to make their own bouquets. Veggies also hadn't arrived yet, but a mix of conventional and organic will be available. 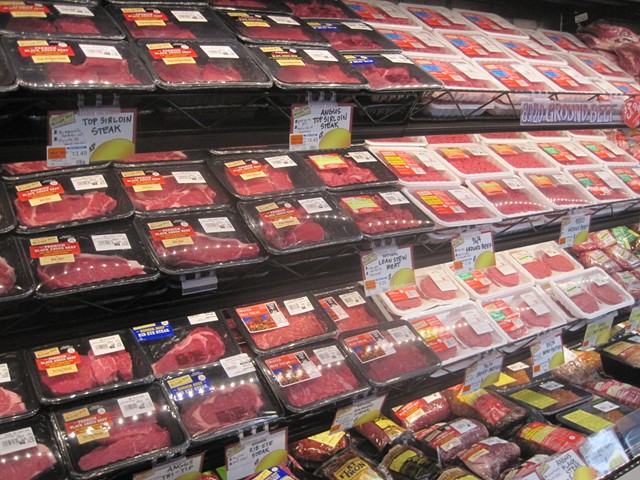 Consumers Union, the policy and advocacy arm of Consumer Reports, has run ads in Seven Days and the Burlington Free Press this week urging Trader Joe's to cease selling the flesh of animals that were fed antibiotics while alive. Surveying the case, I spotted organic, antibiotic-free, kosher and conventional choices. "We have options there for everybody,"  Minihane told me. "We just want to give the customers an option. We let our customers decide what they want to buy."

The truth is that, despite its reputation, Trader Joe's is not a natural-foods store but a market that specializes in unconventional foods at low prices. Of the approximately 3,000 items in the store, 80 percent are sold under the Trader Joe's private label. Each of them is guaranteed to be GMO-free, with no artificial colors, flavors or preservatives. And, yes, meats and veggies are a mixture of organic and not. Of course, Healthy Living Market and Café is right across the driveway with a range of local, consciously raised meats and Vermont-grown veggies.

Exceptionally low prices are how the new store will distinguish itself. Organic bananas are 29 cents apiece, while conventional are 19 cents. Eclectic frozen, prepared foods in the freezer case on Wednesday included bowls of beef-filled bibimbap, shrimp bao and palak paneer, many for prices around $2.99. Fancier meals such as coq au vin top out at $6.99.

But for many, the big draw will be Three-Buck Chuck, or $2.99 bottles of Charles Shaw wine. Last year, the price was pushed up $1 from Two-Buck Chuck, but many Trader Joe's shoppers swear by it. Others think it tastes like $2.99 wine. Ask the sommelier Sam Lipp of NYC's Union Square Café. In a recent Thrillist article, he described the white Zinfandel thus: "It’s the strawberry patch that nature forgot about, then rained and hailed on. Pure liquefied, alcoholic Jolly Rancher."

But some of us like sugar. The cult Speculoos Cookie Butter that I tried in the store's Tiki Board Bistro may have had the unsettling mouthfeel of pre-chewed cookies, but I can't get that smooth spread of spiced Dutch cookies out of my mind.

And shoppers trolling Dorset Street will likely be pleased to find $3.99 tempura shrimp sushi or arugula salad with lemon chicken as an alternative to mall food across the street.

Conclusion: I'll still buy my local meats, veggies, cheeses, toiletries and many other basics at Healthy Living. But cartons of coconut milk will come in handy when cooking Asian food in bulk. A two-pound bag of tortilla chips for $2.99? Sold. Four flavors of mochi ice cream? Hell, yeah.

I didn't want to be sold, but, I have to admit, once the crowds have died down, I'll be scratching at the door with everyone else.