May 06, 2014
The fifth Vermont Restaurant Week is now past tense, but I want to share the details of the best meal I ate in that 10 days.

It was an excellent weekend of eating overall. The $15 menu at the Spot in Burlington featured three well-made courses including a pair of excellent salads. Essex Junction's Café Mediterano knocked it out of the park with a whole-lamb dinner that was truly special. But the standout was a Friday-night meal at Kismet in Montpelier.

I'm a little embarrassed to say that I had never dined at Kismet before that night. But the inspired $35 menu made it almost impossible not to. It was at Kismet that I tasted what I'll remember as the dish of Restaurant Week 2014 — bao gnocchi.

Chef-owner Crystal Maderia told me that the appetizer was inspired by her grandmother, who grew up in Hong Kong. Maderia deconstructed dim-sum-style pork buns by serving petite, gnocchi-sized pieces of dough with a pile of pulled cha siu pork tangled with sesame-flavored spinach. It was a moment of genius that I hope Kismet will serve again in another of the restaurant's frequent menu rotations.

A recent addition to Maderia's kitchen is Jesse LeClair, the opening chef at Barre's Cornerstone Pub & Kitchen. He is of Lebanese heritage and a couple of family recipes graced the Restaurant Week menu. The kibbeh — a lamb tartare mixed with cracked wheat — was magnificently balanced. Freshly grilled, homemade pita was exceptional on its own, but spread with the lightly spiced meat, it was the best kibbeh I ever had. A pile of tangy greens on the side sent it over the edge. LeClair's grandfather would be proud. 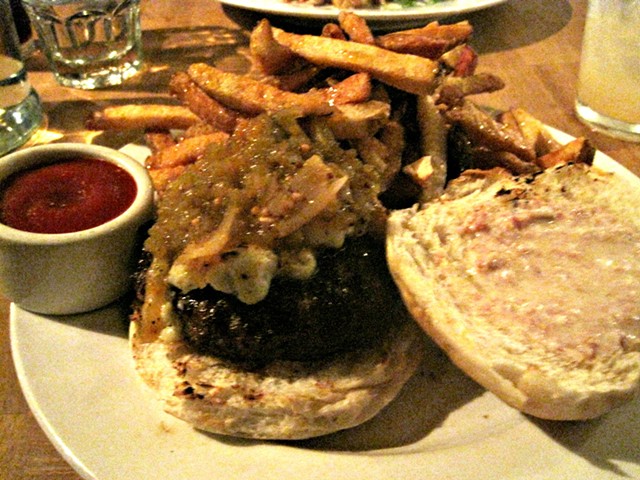 Hindsight being 20/20, I probably should have ordered perch with mujadara for another taste of the Middle East. But I had heard too many great things about the burger to overlook it. The patty itself was cooked a juicy medium. With each bite, it combined with a messy burst of bacon aioli, a tall pile of blue cheese butter and sweet onion relish. It was delightful overkill.

But the star of the plate was a pile of handcut fries drizzled with truffled honey. They were ideally crisped and well salted. The earthy truffle flavor combined with the sweetness of the honey made them irresistible. But so many were piled on the plate that I couldn't finish them.

I usually don't order quail because the single bird is so little food. But with a hearty plating, the quail at Kismet changed my mind. I don't like my poultry pink, and that little bird was just right: juicy but cooked through.

I would have been perfectly happy with this dish even without the quail — its bed of black-pepper spaetzle was that damn good. Sautéed in butter, the little dumplings burst with it every time I took a bite. The pepper could have been overwhelming, but there was just enough to give the spaetzle character. A lightly dressed nest of arugula and artful swirls of truffled honey and tangy saba completed yet another excellently balanced plate.

I was already past capacity, but I had to make room somehow for a meltingly light pot de crème drizzled in sticky salted caramel. My dining partner and I shared a few bites of warm hazelnut cake before we realized we would enjoy it more another day.

And there will be many more days at Kismet for me.