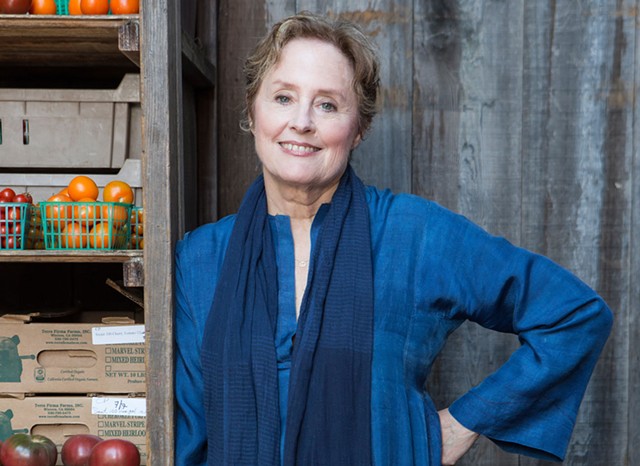 Alice Waters will be visiting Vermont early next month. She'll speak at Sterling College's Dunbar Hall on April 3 at 6:30 p.m. But she isn't just a celebrity chef, restaurateur and Slow Food pioneer passing through on a press tour. Waters has New England connections: Her daughter, Fanny, attended the Mountain School in Vershire, and Waters herself has an honorary degree from Dartmouth College.

Most importantly, she has friends in Vermont. The first leg of her tour will be under the guidance of famous food writer and sometime Northeast Kingdom resident Marian Burros. After her visit to Sterling, Waters will tour Burlington's Intervale Center with its community relations manager, Joyce Cellars.

Spearheading such events has been Cellars' job when other luminaries, such as Mark Bittman, came to town. But this visit will be special. According to Waters, "[Cellars] came to work at Chez Panisse when she was very young. She was my right arm."

Waters is not only a restaurant luminary but an activist: Her Edible Schoolyard Program has gained traction in bringing real food to K-12 schools, and she hopes to see the movement expand to schools and hospitals across the country.

In anticipation of her whirlwind tour, we checked in with Waters about Vermont cuisine, food ethics and eating shoes.

SEVEN DAYS: What brings you to Vermont?
ALICE WATERS: I think there are a lot of things that bring me to Vermont. Sterling is certainly a place that I’ve heard about for a long time from Marian Burros. She just wants me to see the way the curriculum works, the way food is served, and I’m very, very interested in that, of course.

I also have a very, very good friend, Joyce Cellars at the Intervale. She is connected with Slow Food Vermont, and they're very excited to have me come and sign books and talk the talk.

I guess I always have these big visions of what can happen there. I’ve thought for a very long time that Vermont is the state that is really ready for edible education in the public schools — to officially get [to a point] to feed all children real food for school lunch would be an irresistible model for this country.

SD: Will you just be speaking to groups?
AW: I definitely am going to meet suppliers while I’m a at Sterling. I’m presuming that Joyce has a plan for me at the Intervale. I’m not here very long. I’m just hoping that I have an opportunity to talk to some of the powers-that-be around public education while I’m there.

SD: What were your impressions last time you were in Vermont?
AW: There are so many organic growers and so many kinds of makers and markets —  [Vermont is] just sort of enlightened in the big picture. I feel like there's a readiness for something legislative and something that pushes the whole idea much further.

I'm wanting this to happen in a place that doesn’t have a long growing season. We want to to know what we eat in the winter. We want to know how we can feed ourselves deliciously. How we can deal with greenhouses and cold storage and all of the questions that are constantly asked about  — food production when you don’t rely on a global fast-food system.

I think things are multiplying geometrically. I’ve really felt that for the past five years. When Obama stepped into office, it pushed us in a place where I think we're going, and there's no turning back. The young people are committed like I've never seen before. They seem joyfully committed.

SD: Speaking of the President, you wrote two letters to Bill Clinton to try to convince him to plant a White House garden. Why didn't the idea take until the Obama administration?
AW: I think there are a lot of reasons. Hillary [Clinton] always said she planted tomatoes on the roof. I loved that story. The garden is meant to be something very symbolic: You care about nourishment. You care about the land to plant an organic garden.

You saw the backlash from the big companies who tried to tell us that organic was not good. They tried to criticize that very small garden that the Obamas built. That’s the reason [it took so long to plant a presidential garden].

I think the Clintons, in their minds, believed in it. They weren’t in that place. I think it wasn’t until Bill got really sick that he understood that food was not a commodity. He just now realized that, all of a sudden, "Oh goodness, I can’t be treated that way!"

SD: I hear you'll be dining at Hen of the Wood in Burlington during your trip. When choosing a restaurant, do you base your selection primarily on ethics or cuisine?
AW: I always think ethics first. I want to know if it's organic and it’s real food. And so I usually go to a farmers market in a town first and find out which restaurants buy food there. I’m interested in that. Then I'm looking for something that’s pretty simple and straightforward. I’m looking for a real loaf of bread. I’m looking for a real piece of cheese.

SD: Are there any Vermont foods you look forward to trying?
AW: I know you've got some real, first-circle cheese makers, without any question! I've definitely tasted some delicious [Vermont ] cheese.

SD: Is buying local and organic still enough? What's the next thing to look for?
AW: I just heard a fascinating lecture last night as part of a series that's being offered at University of California, Berkeley by Michael Pollan, supported by the Edible Schoolyard Project. Two very serious people spoke about climate change. I think they were both scientists and one of them was definitely a soil scientist.

They talked about working with ranchers, thinking about what it takes to manage the land — all of the land. How certain places where there's erosion, maybe there aren't even crops and animals on the land, but it needs to be cared for. We’re talking about doing the things that send the right message up to the ozone. There are a lot of things we can do that will help. We need the best people to be sharing information on a global scale.

SD: What will your talk at Sterling focus on?
AW: I’m being interviewed by Clark Wolf. I'm going to let him lead the discussion. We'll undoubtedly talk about how we teach Slow Food values in a fast-food culture. That’s our task, and we have to understand how indoctrinating and omnipresent that fast-food culture is, and really try not to use the methods and techniques that the fast-food culture is using to lure us into a consumer society and away from the things that are most meaningful.

SD: But, come on, you must have some guilty pleasures.

AW: I think there are some exceptions in terms of provenance and road miles if the majority of your food is coming from your local place. Our tea and coffee and maybe some cheese can come from someplace else. Maybe you can get some oranges for a treat. I get some truffles from France and Italy. I don't think I could go without my tangerines from Ojai, Calif.

SD: Surely, Werner Herzog's shoe was not local, when you cooked it for Les Blank's 1980 film Werner Herzog Eats His Shoe. Did you try any of it?
AW: I did. It was inedible. It took a crazy person to eat it. I thought that cooking it in duck fat for a day might soften it like a confit. I'm afraid that [eating] his leather shoe, there was just no way. I couldn’t even get my teeth into it.