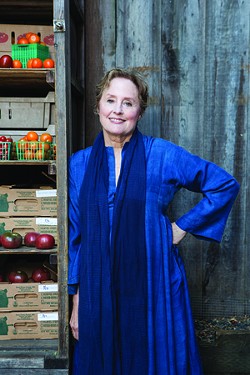 "60 Minutes" called her "the mother of Slow Food." Foodies know her as much for her work with public policy as her groundbreaking cookbooks. Yep, we're talking about Alice Waters,

With a recent surge in big names including Sandor Katz filling the instructor lists for sustainable food programs at Sterling College, it's not a big surprise that a talk by Waters, the woman behind Berkeley, Calif.'s world-famous Chez Panisse, is the college's latest coup.

Waters will appear at Sterling early next month as part of the school's Vermont’s Table Speaker Series. Past speakers have included ecologist and ethnobotanist Gary Nabhan and The Art of Fermentation author Sandor Katz. He'll teach a course in fermentation at Sterling in July.

Will Waters be Sterling's next visiting professor? It's unlikely, given the restaurateur's busy schedule of running her legendary restaurant and writing cookbooks such as The Art of Simple Food and In the Green Kitchen. Waters is also known for pioneering the Edible Schoolyard at Berkeley’s Martin Luther King Jr., Middle School. That program led to the School Lunch Initiative, a national program that has influenced Vermont's own push for local food in schools.

Vermonters can see Waters on April 3 at 6:30 p.m. at Sterling's Dunbar Hall. The event will be free, but tickets must be presented at the door. Slow Food lovers can reserve seats and learn more about the event at sterlingcollege.edu.