Trader Joe's Will Open in South Burlington Store on May 16 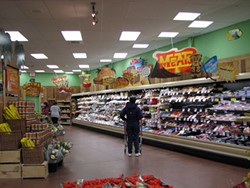 The Trader Joe's that has been taking shape on Dorset Street in South Burlington will open on Friday, May 16, according to a press release issued by the company early this morning.

The 12,800-square-foot store is a typical size for the chain, and will sport the same island motif as its other 400-plus stores. Patrons can probably also expect the same eclectic assortment of food and drink, which can range from dark-chocolate-covered edamame and cheap red wine to salad greens, almond milk, flowers and vitamins.

Trader Joe's was founded in California in 1958, and half of its stores are in that state. The South Burlington store was developed by Montpelier's Malone Properties, and underwent a lengthy permitting process before construction began last summer. No word yet on exactly how many "crew members" — aka staff — the chain will hire to run the store, but last year a local developer estimated about 60.

The store is a stone's throw away from Healthy Living Market and Café  and one of a handful of new locations that will open this year — including stores in Boise, Boca Raton and Tampa.

South Burlington's Trader Joe's will be open daily from 8 a.m. to 9 p.m.