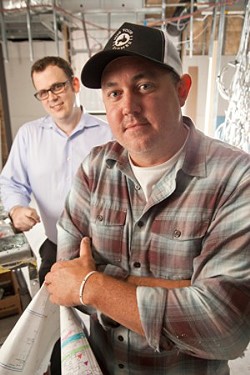 Will this be the year? The semifinalists for the James Beard Foundation Awards were announced this morning. Vermont's culinary Susan Lucci, Eric Warnstedt of Hen of the Wood, has been nominated for his sixth year running. The Beard Awards are known to foodies as the "culinary Oscars" and it truly is "an honor just to be nominated" for one of the restaurant and chef awards.

Warnstedt isn't the only Vermonter among the 20 cooks nominated for Best Chef: Northeast. Wesley Genovart of South Londonderry's SoLo Farm & Table is also on the short list. It's not the team's first brush with Beard. Genovart's co-owner and wife Chloe was maitre d’ at Per Se Restaurant in New York City when it was awarded for the nation's most outstanding service in 2011.

Last year was Vermont's biggest ever for nominations. However, 2013 semifinalists Steve Atkins of Richmond's Kitchen Table Bistro, and  Aaron Josinsky and Nathaniel Wade of Winooski's Misery Loves Company, did not make the cut this year.

The semifinalists will be whittled to finalists on March 19. That's the same day nominees for books and journalism are also announced. Fingers crossed, Vermont names will be on the list.